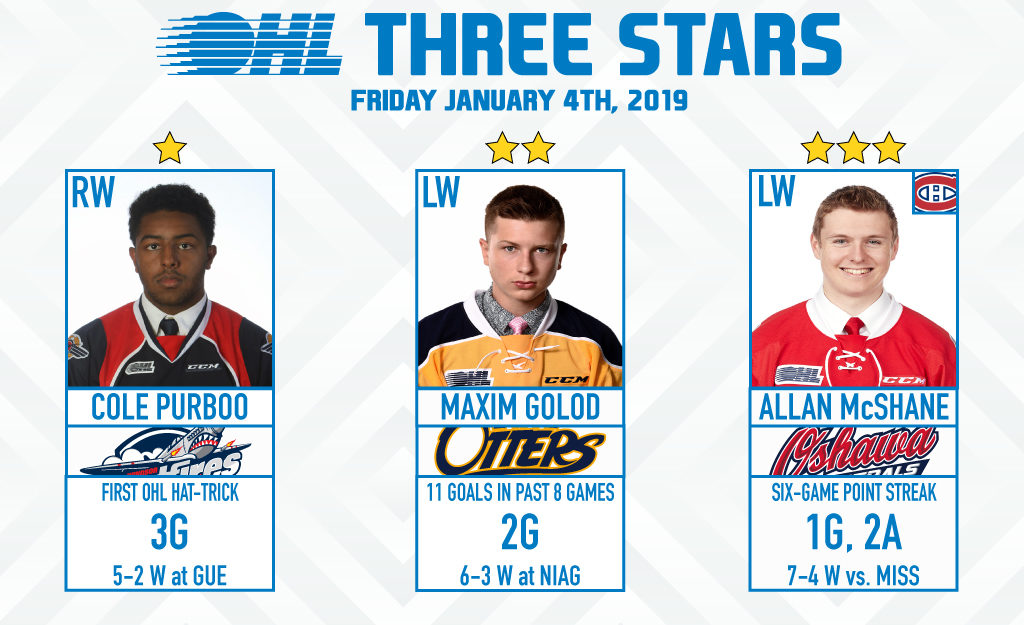 1ST STAR: COLE PURBOO (WINDSOR SPITFIRES):
The first OHL hat-trick from third-year veteran Cole Purboo propelled the Windsor Spitfires to a 5-2 road win in Guelph. The 6-foot-3, 211Ib 19-year-old scored midway through the first before tacking on a pair of third period markers to put things out of reach, helping the Spits earn their second straight win. The Oakville, Ont. native leads the Spitfires with 33 points (19-14–33) through 39 games this season, bringing his career point total to 99. Purboo was Windsor’s ninth round pick in the 2015 OHL Priority Selection from the Mississauga Rebels Minor Midgets.
• GAME HIGHLIGHTS

2ND STAR: MAXIM GOLOD (ERIE OTTERS):
Sophomore forward Maxim Golod stayed red hot on Friday, scoring twice to lead the Erie Otters past the CHL’s ninth-ranked Niagara IceDogs 6-3 on the road. Golod has scored 11 of his 13 goals this season over the past 10 games, finding the back of the net in six straight to give him 25 points (13-12–25) over 38 contests. The 18-year-old product of Concord, Ont. was a member of the OHL’s Second All-Rookie Team last season and attended training camp with the Detroit Red Wings in September. He was Erie’s 13th round pick in the 2016 OHL Priority Selection from the Mississauga Senators Minor Midgets.
• GAME HIGHLIGHTS

3RD STAR: ALLAN McSHANE (OSHAWA GENERALS):
Montreal Canadiens prospect Allan McShane scored and tacked on two assists as the Oshawa Generals got the better of the visiting Mississauga Steelheads by a score of 7-4. McShane buried his 15th goal of the season 6:09 into regulation and picked up assists on goals by Anthony Salinitri and Serron Noel. McShane’s unit alongside the two aforementioned forwards combined for 11 points on the night, keeping the Generals secure in second place in the East Division. The 18-year-old native of Collingwood, Ont. has points in six straight games, with a total of 30 (15-15–30) over 33 games this season. The Toronto Marlboros Minor Midget grad was a first round pick of the Erie Otters in the 2016 OHL Priority Selection. He was Montreal’s fourth round pick this past summer.
• GAME HIGHLIGHTS