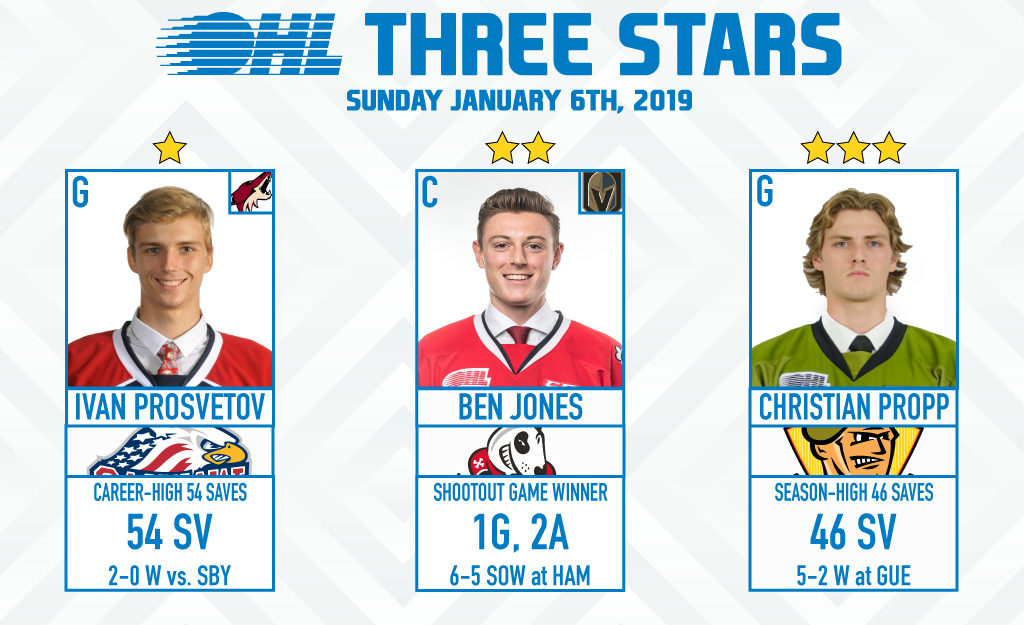 1ST STAR: IVAN PROSVETOV (SAGINAW SPIRIT):
Arizona Coyotes prospect Ivan Prosvetov stopped all 54 shots he faced, logging his third shutout of the season as the Saginaw Spirit earned their sixth straight win in a 2-0 blanking of visiting Sudbury. Prosvetov turned in a 26-save second period and went on to stop the most pucks in a shutout by a goaltender since March 2011, helping the Spirit pull to within two points of the West Division lead. The Spirit were outshot 54-30, but Prosvetov improved his record to 20-6-1-0 with a 3.07 goals-against average and a .902 save percentage in this, his first OHL season. The 19-year-old from Moscow, Russia was the 13th overall pick of the 2018 CHL Import Draft. He was Arizona’s fourth round pick this past summer.
• GAME HIGHLIGHTS

2ND STAR: BEN JONES (NIAGARA ICEDOGS):
Veteran captain Ben Jones had a goal and two assists before netting the shootout winner to lead the Niagara IceDogs over the Hamilton Bulldogs 6-5 on the road. After setting up Jacob Paquette midway through the second period, Jones brought the IceDogs back to within a goal after being down 4-2. He chipped in with an assist on Andrew Bruder’s tying goal midway through the third before scoring the only goal of the shootout past Hamilton’s Zach Roy to give the IceDogs a seven-point lead atop the Central Division. A 19-year-old from Waterloo, Ont., the Toronto Marlboros Minor Midget grad was Niagara’s first round pick of the 2015 OHL Priority Selection. He was Vegas’ seventh round pick in 2017.
• GAME HIGHLIGHTS

3RD STAR: CHRISTIAN PROPP (NORTH BAY BATTALION):
Continuing his strong play of late, Christian Propp stopped 46 of 48 to backstop the North Bay Battalion to a 5-2 victory in Guelph. The Troops win for the seventh time in the past eight games despite being outshot 48-24 as Propp earned his eighth straight win. The 19-year-old from Milton, Ont. is 15-14-0-0 with a 3.78 goals-against average and .894 save percentage over 30 games this season. Originally Barrie’s fifth round pick in 2015, Propp is set to appear in his 100th career OHL contest when he hits the ice again.
• GAME HIGHLIGHTS