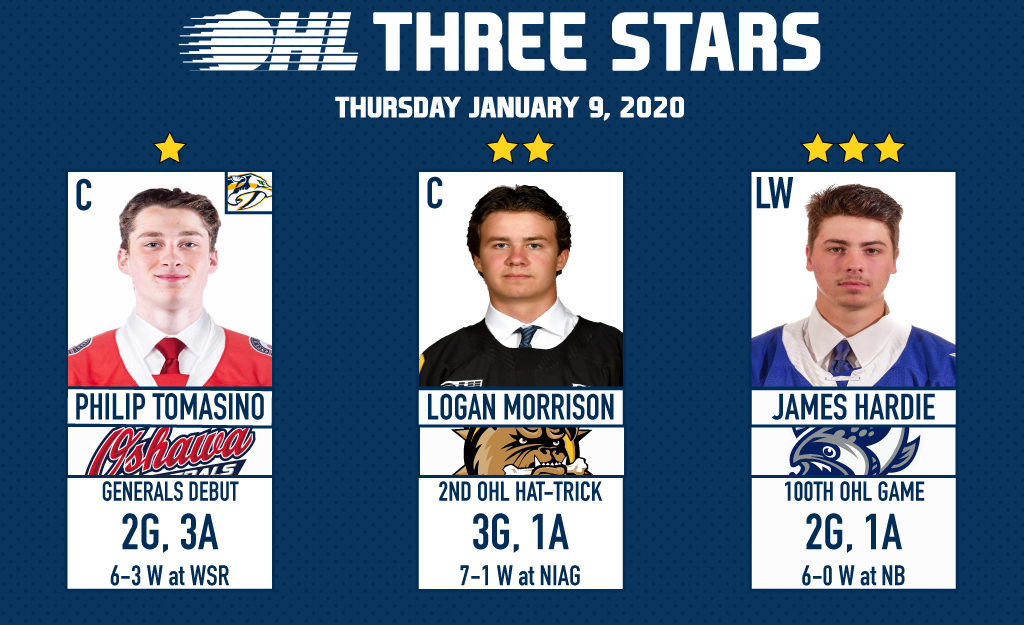 1ST STAR: PHILIP TOMASINO (OSHAWA GENERALS) – 2G, 3A IN GENERALS DEBUT
In his debut with the Oshawa Generals, Philip Tomasino found the back of the net twice and picked up three helpers as the Gens doubled up on the Western Conference-leading Windsor Spitfires 6-3. The third year OHLer and Nashville Predators prospect netted two in a row within the game’s final minutes to extend his team’s win, and assist on goals from teammates Brett Neumann, Ty Tullio, and Allan McShane, the latter of which came on the power play. Tomasino was selected by the Predators 24th overall at last June’s NHL Draft, and was the fifth overall pick of the IceDogs in the 2017 OHL Priority Selection. In his third season with Niagara, he totaled 57 points (22-35-57) through 36 games. His new point total of 62 (24-38-62) places him fifth among all OHL skaters.
• HIGHLIGHTS

2ND STAR: LOGAN MORRISON (HAMILTON BULLDOGS) – 3G, 1A
Hamilton Bulldogs sophomore Logan Morrison notched his second OHL hat-trick in his team’s 7-1 blowout of the Niagara IceDogs. The 17-year-old centreman from Guelph, Ont., who is eligible for the upcoming 2020 NHL Draft, scored midway through the first period to make it 2-0, and lifted the lead to 4-0 with his second goal early in the middle frame. He added one more midway through the second period to bring the score up to 5-1, and assisted on Tag Bertuzzi‘s second goal of the night. Morrison, who was selected by the Bulldogs 18th overall in the 2018 OHL Priority Selection, now boasts 18 goals and 15 assists for 33 points through the first 36 games of his second season with the club.
• HIGHLIGHTS

3RD STAR: JAMES HARDIE (MISSISSAUGA STEELHEADS) – 2G, 1A
NHL Draft prospect James Hardie put up a three-point performance in his 100th OHL game as his Mississauga Steelheads blew past the struggling North Bay Battalion 6-0 Thursday night. The 17-year-old native of Innisfil, Ont. scored in the second period to make it 3-0 and later potted the game’s final goal to secure the six-goal victory. He also picked up an assist on Richard Whittaker’s goal midway through the middle frame. The second-year winger has now amassed 18 goals and 13 assists for 31 points through the season’s first 38 games, surpassing last year’s point total of 22 (15-7-22) in 62 games played. The 5-foot-11 forward was selected eighth overall by the Trout in the 2018 OHL Priority Selection.
• HIGHLIGHTS