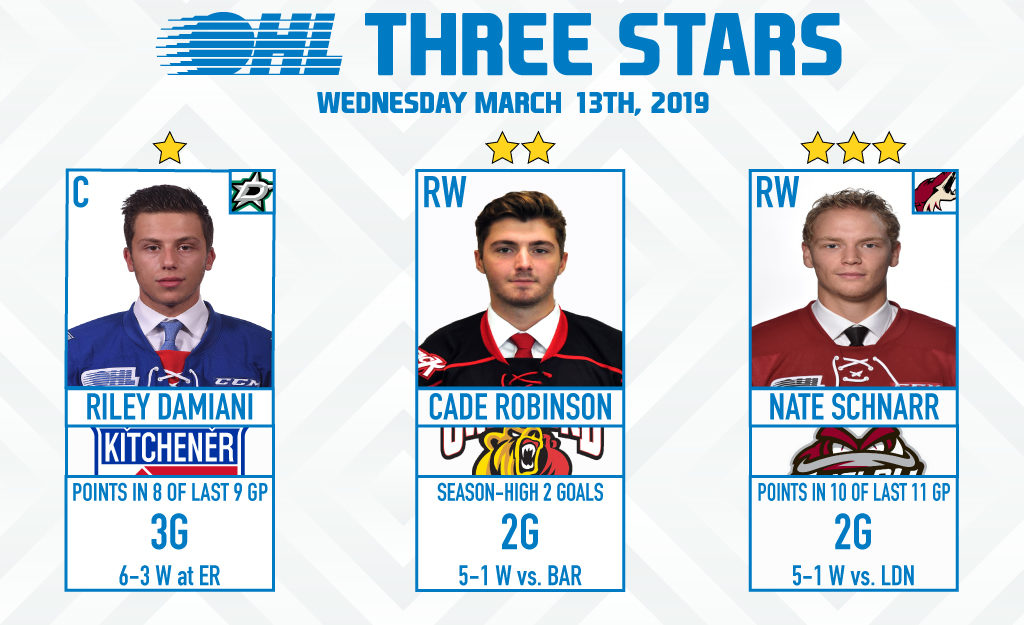 1ST STAR: RILEY DAMIANI (KITCHENER RANGERS):
Dallas Stars prospect Riley Damiani netted his second hat-trick of the season, guiding the Kitchener Rangers past the Erie Otters 6-3 on the road. Damiani had help from linemate Rickard Hugg, who drew assists on each of his three goals. The 18-year-old from Mississauga, Ont. has points in eight of his last nine games for a season total of 82 (29-53–82) over 56 contests. Currently in his third season with the Rangers, Damiani was Kitchener’s second round pick in the 2016 OHL Priority Selection from the Mississauga Rebels Minor Midgets. He was Dallas’ fifth round pick last summer.
• GAME HIGHLIGHTS

3RD STAR: NATE SCHNARR (GUELPH STORM):
Last week’s OHL ‘On the Run’ Player of the Week, Arizona Coyotes prospect Nate Schnarr has continued his steady production, scoring twice in Wednesday’s 5-1 Guelph Storm victory over visiting London. Having recently surpassed the 100-point mark, Schnarr netted his 33rd and 34th goals of the season as the Storm won for the eighth time in the past 10 games. The 19-year-old from Waterloo, Ont. has points in 10 of his last 11 contests and a total of 102 on the campaign. Originally Guelph’s third round pick in 2015, Schnarr was chosen by Arizona in the third round of the 2017 NHL Draft.
• GAME HIGHLIGHTS