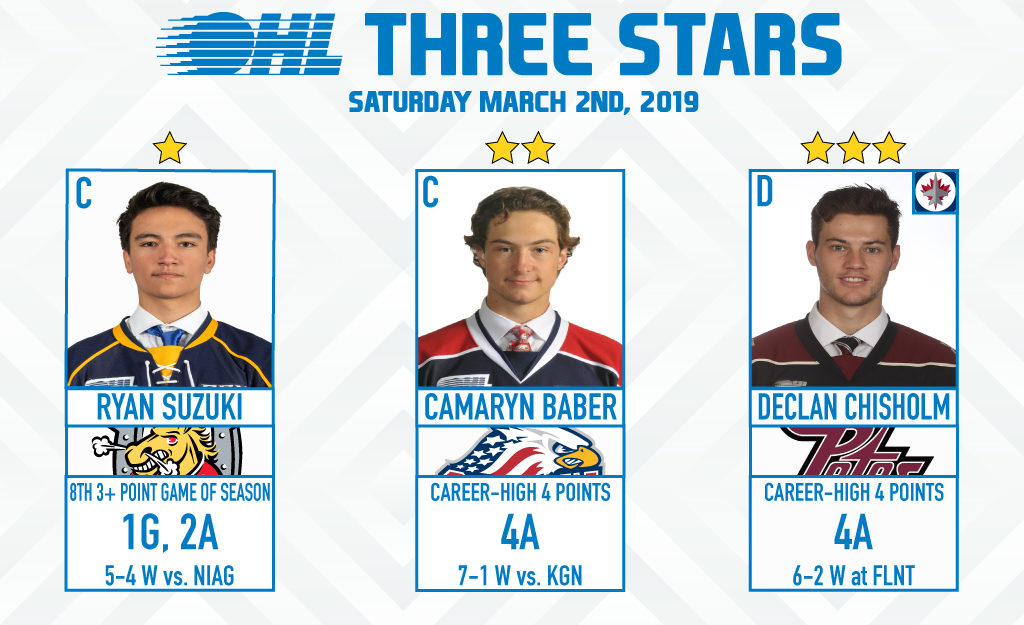 2ND STAR: CAMARYN BABER (SAGINAW SPIRIT):
Rookie Saginaw Spirit forward Camaryn Baber recorded a career-high four assists in a 7-1 win over the visiting Kingston Frontenacs. All four of Baber’s assists were primary helpers as the 17-year-old from Sault Ste. Marie, Ont. finished the game with 19 points (6-13–19) over 41 games this season. A former third round pick by the Spirit in 2017, Baber is the son of former Soo Greyhounds Memorial Cup champion Brad Baber (1991-95). The 5-foot-11, 180Ib centreman appeared in 11 games with the Spirit last season, spending the other part of the year with the Soo Thunderbirds of the NOJHL.
• GAME HIGHLIGHTS

3RD STAR: DECLAN CHISHOLM (PETERBOROUGH PETES):
Winnipeg Jets prospect Declan Chisholm also put up four assists on Saturday as the Peterborough Petes took a 6-2 win in Flint. Chisholm set up Zach Gallant to open the scoring before pitching in on goals by Chris Paquette, Adam Timleck and Chad Denault. The 19-year-old from Bowmanville, Ont. has 43 points (4-39–43) over 60 games with the Petes in this, his third OHL season. Chisholm was Winnipeg’s fifth round pick last summer. He was a second round pick of the Petes in the 2016 OHL Priority Selection from the Don Mills Flyers Minor Midgets.
• GAME HIGHLIGHTS