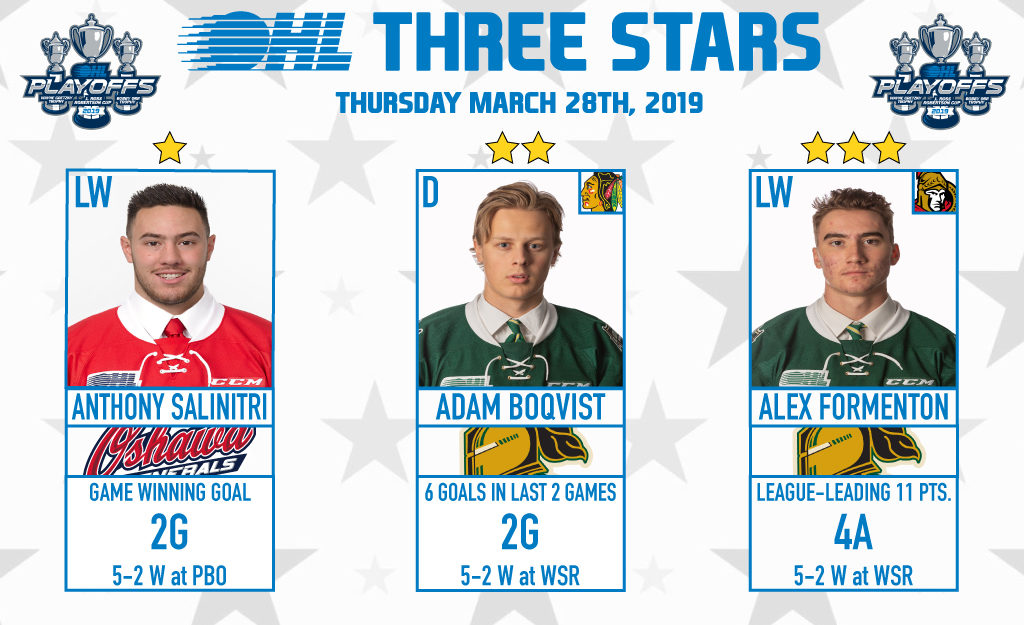 1ST STAR: ANTHONY SALINITRI (OSHAWA GENERALS):
Anthony Salinitri broke open a 2-2 tie on a third period breakaway, giving the Oshawa Generals a 3-1 series lead with a 5-2 road win over the Peterborough Petes in Game 4. Salinitri scored twice, helping the Generals prevail despite being outshot 37-27, scoring his third and fourth goals of the 2019 OHL Playoffs. The 21-year-old Windsor, Ont. native racked up 48 goals and 88 points over 68 games between Oshawa and Sarnia this past season including a league-leading seven shorthanded goals. A former sixth round pick of the Philadelphia Flyers in 2016, Salinitri is in the hunt for an NHL contract. He attended rookie camp with the Vancouver Canucks last September.
• GAME HIGHLIGHTS

2ND STAR: ADAM BOQVIST (LONDON KNIGHTS):
Chicago Blackhawks first round pick Adam Boqvist strung together his second straight multi-goal game. The free-wheeling defenceman scored twice as the London Knights completed a 4-0 series sweep of the Windsor Spitfires with a 5-2 road win. Boqvist opened the scoring 1:37 into action before providing the Knights insurance with 3:40 left in the second. The 18-year-old from Falun, Sweden leads the league with six playoff goals for seven points (6-1–7) over four games. Boqvist put up 20 goals and 60 points over 54 games in his first OHL season. He was the eighth overall pick of the 2018 NHL Draft.
• GAME HIGHLIGHTS

3RD STAR: ALEX FORMENTON (LONDON KNIGHTS):
Ottawa Senators prospect Alex Formenton pulled into the OHL playoff scoring lead, racking up four assists in Thursday’s 5-2 series clinching road win over the Windsor Spitfires. Formenton has points in three of the four games in the series, putting together back-to-back four point efforts in Games 3 and 4. He has 11 points (2-9–11) in total after putting up 34 (13-21–34) in 31 games this past season. Formenton, who represented Canada at the World Juniors in each of the past two years, has played a total of 10 career NHL games with the Senators and scored his first NHL goal earlier this season.
• GAME HIGHLIGHTS