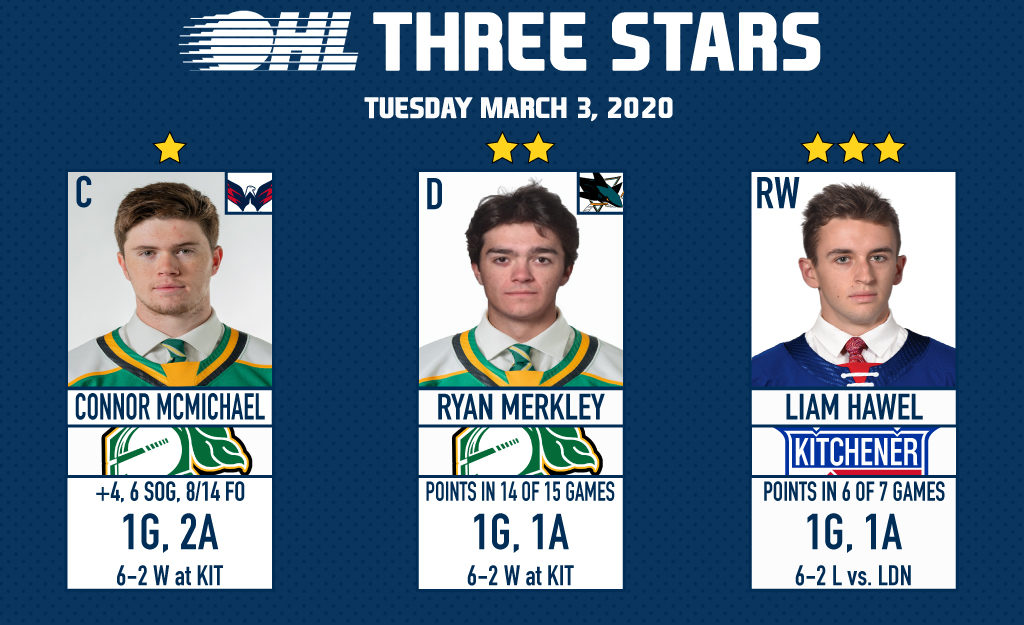 1ST STAR: CONNOR MCMICHAEL (LONDON KNIGHTS) – 1G, 2A
Washington Capitals prospect Connor McMichael led a 6-2 London Knights win over the Kitchener Rangers with a goal and pair of assists. The 19-year-old forward connected with Matvey Guskov for the game’s opening goal before notching his 43rd on the year at the 14:01 marker of the opening frame to extend his team’s lead to 4-1. In the game’s final minutes, he’d add help on a goal off the stick of Jason Willms. The Ajax, Ont. native is seated fourth in the OHL scoring race with a career high 97 points over 49 games in his fourth OHL stint, and ties Hamilton’s Arthur Kaliyev as well as Oshawa’s Brett Neumann for a third-highest 43 goals. The Team Canada gold medalist was an original draft pick by the Hamilton Bulldogs at 11th overall in the 2017 OHL Priority Selection before heading to London midway through the season. He was selected 25th overall by Washington at last summer’s NHL Draft.

2ND STAR: RYAN MERKLEY (LONDON KNIGHTS) – 1G, 1A
San Jose Sharks pick Ryan Merkley put up a goal and an assist to help the Knights defeat the Rangers in a 6-2 decision. The defender skated around his opponent and shot the puck over the blocker with 42 seconds left in the first period for a 3-0 London lead. Minutes earlier, he fed the puck to teammate Luke Evangelista who was then able to find the back of the net shorthanded. The 19-year-old product of Mississauga boasts a career high 60 assists and 75 points over 57 games in his fourth OHL season, tying Ottawa’s Noel Hoefenmayer for most points on the season among fellow defencemen. The first overall pick of the 2016 OHL Selection, Merkley was drafted by the Guelph Storm and would spend two and a half seasons there before heading to the Peterborough Petes and then landing with the Knights. He was scooped up by San Jose 21st overall at the 2018 NHL Draft.

3RD STAR: LIAM HAWEL (KITCHENER RANGERS) – 1G, 1A
Fifth year OHL vet Liam Hawel scored a goal and added an assist in the Rangers’ 6-2 loss at the hands of the Knights. The 20-year-old Kanata native earned his 22nd of the season midway through the second period, and now owns 66 points over 51 games for second in Kitchener scoring behind co-captain Riley Damiani. The 20-year-old, 6-foot-4 winger was an original first round draft pick of the Soo Greyhounds in 2015 and was dealt to the Guelph Storm in a 2017 deadline deal before heading to Kitchener ahead of his overage year. He attended training camp with the Montreal Canadiens last September.