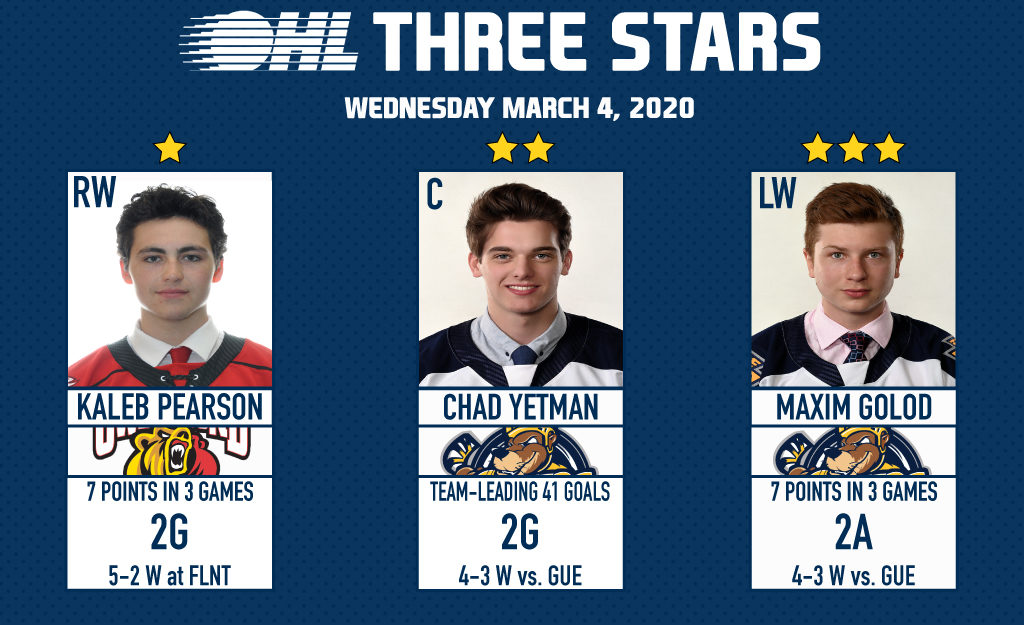 1ST STAR: KALEB PEARSON (OWEN SOUND ATTACK) – 2G
Sophomore forward Kaleb Pearson scored twice, guiding the Owen Sound Attack to a 5-2 road win in Flint. Pearson has been red hot in the second half of the season, recording 33 points (15-18–33) over 24 games since Jan. 1st. The 19-year-old from St. Marys, Ont. has recorded seven points over his last three outings and now has a total of 51 points (27-24–51) over 59 games this season. The 5-foot-11, 184Ib. right-winger is a former second round pick of the Flint Firebirds in the 2017 OHL Under-18 Priority Selection.
• HIGHLIGHTS

2ND STAR: CHAD YETMAN (ERIE OTTERS) – 2G
Erie Otters forward Chad Yetman scored twice, becoming the 16th different player in Erie Otters history to reach the 40-goal milestone as his club skated to a 4-3 win over visiting Guelph. The 19-year-old from Whitby, Ont. had a total of eight shots on goal in the win and now leads the Otters with 41 goals along with 31 assists for 72 points in 59 games this season. The third-year veteran is a former 10th round pick of the Otters in the 2016 OHL Priority Selection. He attended training camp with the Detroit Red Wings in September.
• HIGHLIGHTS

3RD STAR: MAXIM GOLOD (ERIE OTTERS) – 2A
Veteran playmaker Maxim Golod picked up a pair of assists on Wednesday, helping the Otters pick up two big points in their push for a playoff spot. The 19-year-old from Concord, Ont. leads the Otters with 77 points (25-52–77) in 61 games this season including seven points over his last three games. The former 13th round pick in the 2016 OHL Priority Selection is now in his third OHL season. He attended training camp with the Philadelphia Flyers in September.
• HIGHLIGHTS