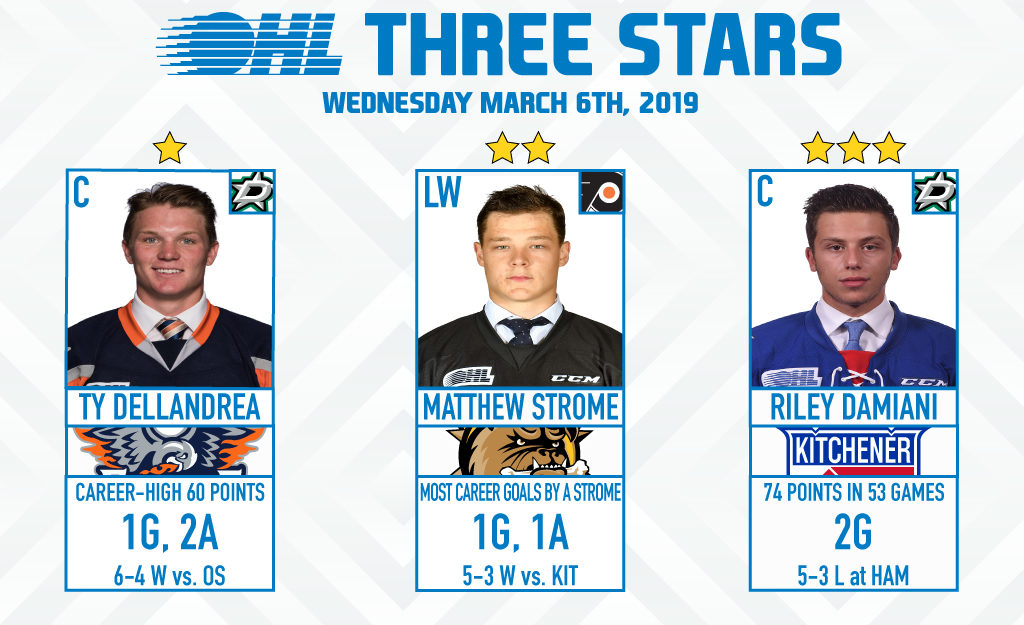 1ST STAR: TY DELLANDREA (FLINT FIREBIRDS):
Dallas Stars prospect Ty Dellandrea potted his 21st goal of the season along with a pair of primary assists as the Flint Firebirds got the better of visiting Owen Sound 6-4. Dellandrea achieved a new career-high, reaching the 60-point (21-39–60) mark in the win as the Firebirds won for the fourth time in the last 10 games. The 18-year-old from Port Perry, Ont. is in his third year with the Firebirds after being the club’s first round (5th overall) pick in the 2016 OHL Priority Selection. He was Dallas’ first round (13th overall) pick in the 2018 NHL Draft.
• GAME HIGHLIGHTS

2ND STAR: MATTHEW STROME (HAMILTON BULLDOGS):
Philadelphia Flyers prospect Matthew Strome (28) had a goal and an assist as the Hamilton Bulldogs put a five-game slide behind them, defeating the visiting Kitchener Rangers 5-3. Strome’s 115th career goal makes him the highest-scoring of the league’s three Strome brothers as he follows in the footsteps of Ryan (Niagara IceDogs) and Dylan (Erie Otters). He picked up a nifty primary assist on Jan Jenik’s 12th goal of the season as the Bulldogs pulled into a sixth place tie with Peterborough in the Eastern Conference standings. The highest scoring player in Hamilton Bulldogs history, Strome has 78 points (28-50–78) over 64 games this season. He was Philadelphia’s fourth round pick in the 2017 NHL Draft.
• GAME HIGHLIGHTS

3RD STAR: RILEY DAMIANI (KITCHENER RANGERS):
Dallas Stars prospect Riley Damiani scored twice on Wednesday as the Kitchener Rangers came up short in Hamilton. The 18-year-old pulled the Rangers to within a goal with his 25th of the season inside the final five minutes of the third period. The third-year centreman has 74 points (25-49–74) over 53 games this season and has two-point outputs in four of his last five games. Damiani was Dallas’ fifth round pick last summer.
• GAME HIGHLIGHTS