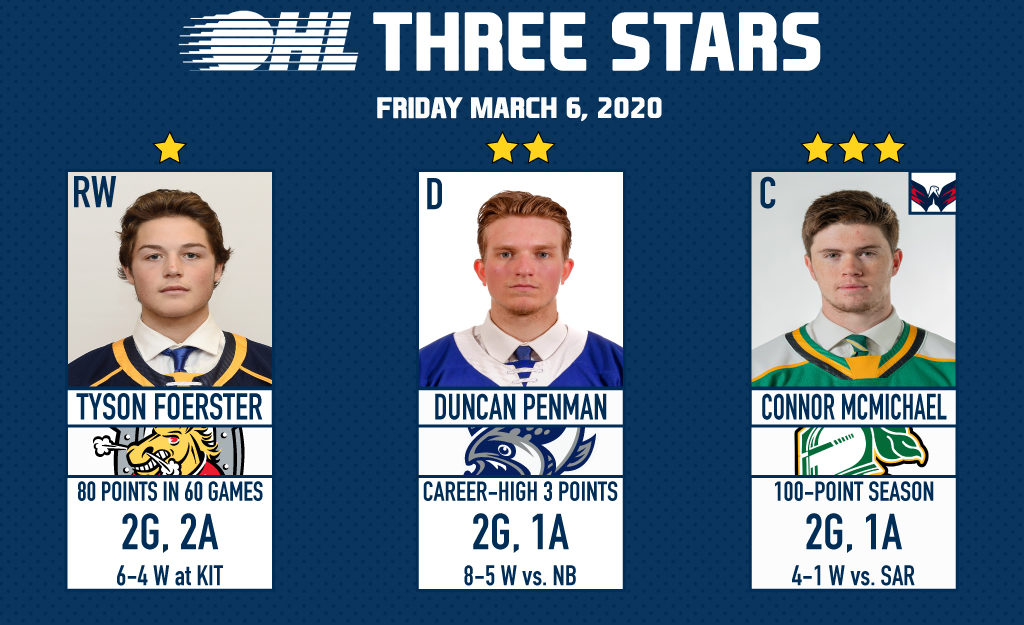 1ST STAR: TYSON FOERSTER (BARRIE COLTS) – 2G, 2A
NHL Draft hopeful Tyson Foerster earned a pair of goals and a pair of assists in the Barrie Colts’ 6-4 road win over the Kitchener Rangers. The 18-year-old native of Alliston, Ont. scored midway through the third period to lift the Colts up 5-3 and later found the empty net to secure a 6-4 victory. He now holds a team-leading 80 points (36-44—80) on the campaign. Foerster was a third round pick of the Colts at the 2018 OHL Priority Selection and is gearing up to hear his name called by an NHL club this summer.
• HIGHLIGHTS

2ND STAR: DUNCAN PENMAN (MISSISSAUGA STEELHEADS) – 2G, 1A
A career high three-point night from third-year blueliner Duncan Penman had a hand in the Mississauga Steelheads’ playoff clinching 8-5 victory over the Central Division rival North Bay Battalion. He registered an assist on a goal from Ty Collins before scoring in the second and third periods. The 18-year-old holds a career-best 21-point total (10-11—21) over 60 appearances this season. A native of Oakville, Penman was a second round pick of the Saginaw Spirit at the 2017 OHL Priority Selection before being acquired by the Fish at the 2019 deadline.
• HIGHLIGHTS

3RD STAR: CONNOR MCMICHAEL (LONDON KNIGHTS) – 2G, 1A
Washington Capitals first rounder Connor McMichael put up a pair of goals and an assist to reach 100 points on the season, helping his London Knights to a 4-1 win over the Sarnia Sting. He potted his 44th and 45th goals and added help on a goal from Alec Regula. The 19-year-old centreman from Ajax, Ont. has now earned three points in two straight games and is one of four players to have entered the century club in points. The Team Canada gold medalist sits third in scoring among his fellow OHL skaters. McMichael was a first round pick of the Knights in 2017 and a first round pick of the Capitals at last year’s NHL Draft.
• HIGHLIGHTS