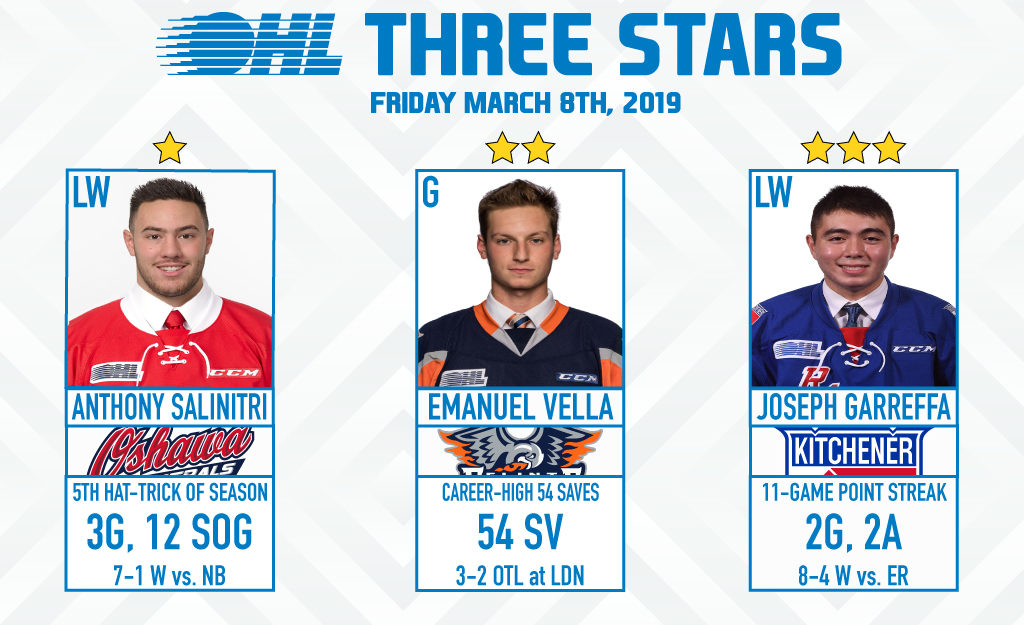 1ST STAR: ANTHONY SALINITRI (OSHAWA GENERALS):
Overage winger Anthony Salinitri‘s fifth hat-trick of the season came in natural fashion. The recently-turned 21-year-old scored three times less than 10 minutes apart as the Generals earned their 40th win, defeating visiting North Bay 7-1. Salinitri racked up 12 shots on goal in the game and increased his production totals to 45 goals and 85 points over 63 games this season, netting 31 of those markers over 38 games as an Oshawa General. Currently without an NHL contract, the Windsor, Ont. native is a former sixth round pick of the Philadelphia Flyers in 2016. He attended rookie camp with the Vancouver Canucks last September.
• GAME HIGHLIGHTS

2ND STAR: EMANUEL VELLA (FLINT FIREBIRDS):
Emanuel Vella stood on his head Friday night, helping the Flint Firebirds earn a point in a 3-2 overtime road loss to the London Knights. Vella turned aside 54 shots before surrendering an overtime winner off the stick of London defenceman Adam Boqvist on a breakaway. The 20-year-old netminder’s 54 saves are a new career-high as he has stopped 45 or more five different times this season. The Toronto, Ont. native is 6-22-4-0 on the campaign. He attended training camp with the New York Islanders last September.
• GAME HIGHLIGHTS

3RD STAR: JOSEPH GARREFFA (KITCHENER RANGERS):
The very versatile Joseph Garreffa continued his recent run of success, extending his point streak to 11 games with his third four-point contest of the season. The Kitchener Rangers doubled up the visiting Erie Otters 8-4 as Garreffa, who has frequented the wing and spent time on defence thrived in a role down the middle, winning 11 of his 17 faceoffs while scoring a pair of goals and two assists. The 5-foot-7 forward recorded his 80th point, giving him 29 goals and 51 assists over 64 games this season. The 19-year-old from Toronto, Ont. was Kitchener’s third round pick in the 2015 OHL Priority Selection from the Toronto Titans Minor Midgets.
• GAME HIGHLIGHTS 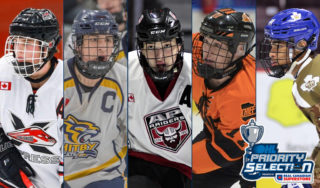 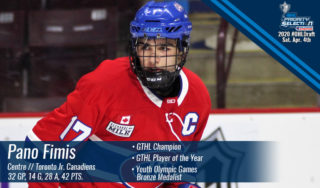