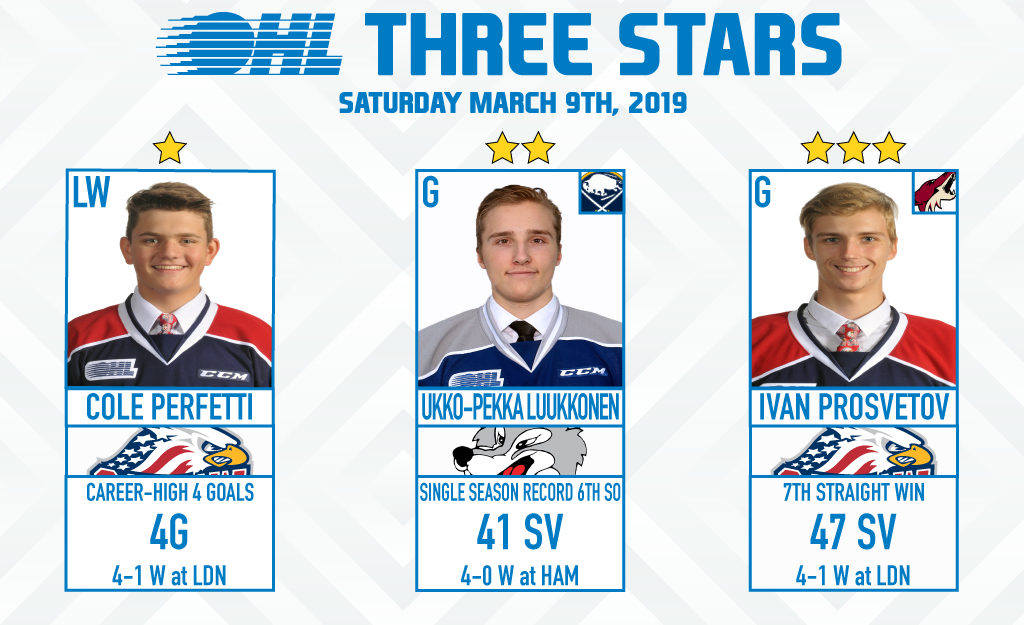 1ST STAR: COLE PERFETTI (SAGINAW SPIRIT):
Cole Perfetti‘s impressive rookie season continued on Saturday in London as the fifth overall pick of the 2018 OHL Priority Selection scored four times in a 4-1 Saginaw Spirit road win over the London Knights. Linemate Owen Tippett picked up three assists as Perfetti became the first OHL rookie in his 16-year-old year to score four goals in a game since Peterborough’s Ryan Spooner last did so back in March 2009. Perfetti’s 35 goals are the most by an OHL rookie of that designation since Windsor’s Taylor Hall netted 45 in 2007-08. The Vaughan Kings Minor Midget grad leads OHL freshmen with 70 points (35-35–70) over 59 games this season. The Whitby, Ont. native will be eligible for the 2020 NHL Draft.
• GAME HIGHLIGHTS

2ND STAR: UKKO-PEKKA LUUKKONEN (SUDBURY WOLVES):
Buffalo Sabres prospect Ukko-Pekka Luukkonen made franchise history on Saturday, stopping all 41 shots he faced in a 4-0 shutout road win over the Hamilton Bulldogs. Luukkonen’s sixth shutout sets a new Wolves single season record while also tying him with three others for the club’s career mark. The Finnish netminder celebrated his 20th birthday in style as the Wolves rebounded from a Friday night loss in Niagara, giving Luukkonen a league-leading 36th win as the Wolves stayed in the Central Division chase. The 2019 World Junior gold medalist leads the league with a .921 save percentage over 50 games played. He was Buffalo’s second round pick in 2017.
• GAME HIGHLIGHTS

3RD STAR: IVAN PROSVETOV (SAGINAW SPIRIT):
Arizona Coyotes prospect Ivan Prosvetov stopped 47 of the 48 shots he faced to backstop the Saginaw Spirit past the London Knights 4-1 on the road. Prosvetov had his shutout bid broken up by London’s Cole Tymkin with 5:35 to go in regulation but managed to improve to 35-10-1-1 on the season with a 2.96 goals-against average and .909 save percentage. The recently-turned 20-year-old native of Moscow, Russia has won seven straight starts as the Spirit hold down the West Division lead. Prosvetov was Arizona’s fourth round pick last summer.
• GAME HIGHLIGHTS