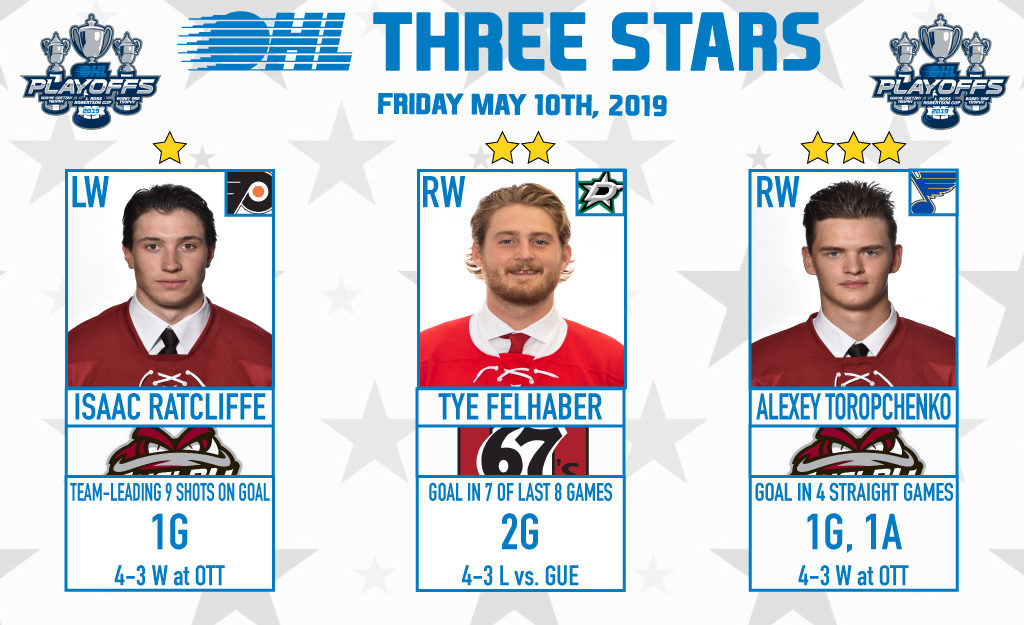 1ST STAR: ISAAC RATCLIFFE (GUELPH STORM):
Guelph Storm captain Isaac Ratcliffe scored and racked up nine shots on goal in Friday’s 4-3 road win over the Ottawa 67’s. The Storm climb to within one win of an OHL Championship and Ratcliffe has played a big part in the comeback effort after Guelph fell behind 2-0 for a third straight series. The Philadelphia Flyers prospect has a total of 26 points (13-13–26) in 23 playoff contests following a 50-goal, 82-point regular season. The 6-foot-6 native of London, Ont. is wrapping up his fourth year with the Storm after being the club’s first round pick back in 2015. Ratcliffe was Philadelphia’s second round pick in 2017.

2ND STAR: TYE FELHABER (OTTAWA 67’s):
Dallas Stars prospect Tye Felhaber scored twice, netting his League-leading 16th and 17th goals of the postseason as the Ottawa 67’s came up short in Game 5. Felhaber has scored in seven of his last eight contests and has a total of 27 points (17-10–27) over 17 games. The 20-year-old from Pembroke, Ont. had a tremendous 109-point (59-50–109) regular season and signed as a free agent with the Dallas Stars in March. Over his five-year OHL career, Felhaber racked up 285 (145-140–285) regular season points over 311 regular season contests between Ottawa and Saginaw.

3RD STAR: ALEXEY TOROPCHENKO (GUELPH STORM):
St. Louis Blues prospect Alexey Toropchenko was a factor once again, scoring in a fourth straight game as the Guelph Storm defeated the Ottawa 67’s 4-3 on the road in Game 5. Toropchenko improved his output to 19 points (13-6–19) over 23 playoff contests as the Storm are one win away from an OHL Championship. The 19-year-old from Moscow, Russia has been a physical presence in the series, recently becoming the first player in over 20 years to score twice in three straight OHL Championship Series matchups. Toropchenko was St. Louis’ fourth round pick in 2017.