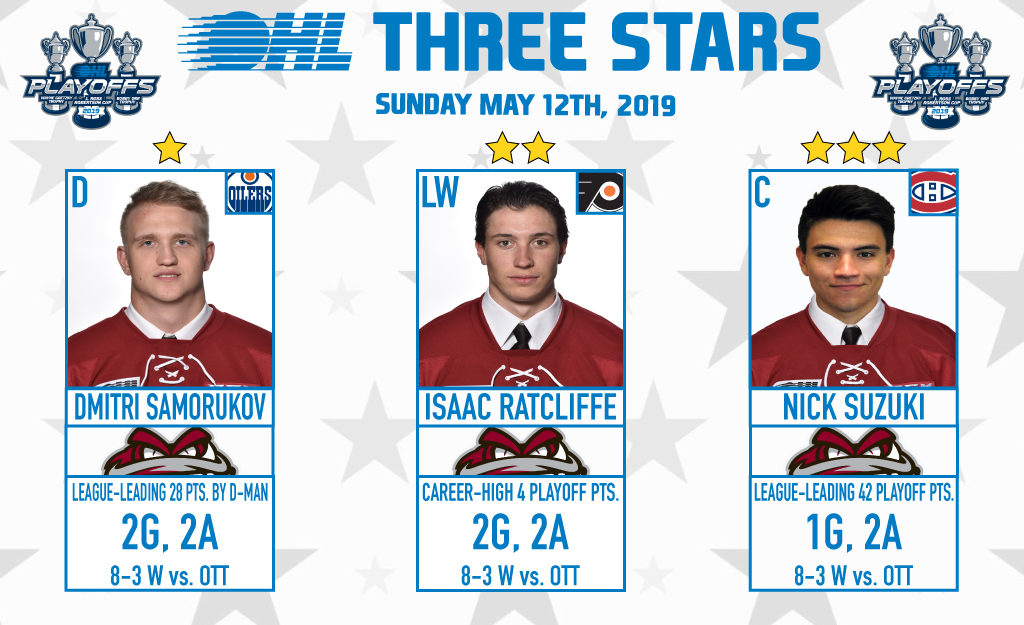 1ST STAR: DMITRI SAMORUKOV (GUELPH STORM):
Edmonton Oilers prospect Dmitri Samorukov saved one of his best performances of the 2019 playoffs for last on Sunday, scoring twice as adding two assists as the Guelph Storm were crowned OHL champions in an 8-3 victory. The 19-year-old native of Volgograd, Russia scored on a pair of booming power play slapshots from the point to give him his second four-point effort of the postseason. Samorukov’s 28 points (10-18–28) are the most by a defenceman in the OHL Playoffs since Windsor’s Ryan Ellis in 2010. The 2019 World Junior bronze medalist was Edmonton’s third round pick in 2017.

2ND STAR: ISAAC RATCLIFFE (GUELPH STORM):
Guelph Storm captain Isaac Ratcliffe hoisted the J. Ross Robertson Cup after putting up a career-high four playoff points with two goals and two assists in an 8-3 Game 6 win over the Ottawa 67’s. The 6-foot-6 winger from London, Ont. scored the tying and go-ahead goals in a five-goal second period, finishing the playoffs with 30 points (15-15–30) and a league-leading 99 shots on goal. The fourth-year Storm veteran was Philadelphia’s second round pick in 2017.

3RD STAR: NICK SUZUKI (GUELPH STORM):
Montreal Canadiens prospect Nick Suzuki capped off an unforgettable playoff run with a goal and two assists in Sunday’s championship-clinching 8-3 win over the Ottawa 67’s. The 19-year-old from London, Ont. was named OHL Playoff MVP with a league-leading 42 points (16-26–42) to set a new Storm franchise record. Suzuki had three different three-point outings in the Rogers OHL Championship Series and finished things with points in 21 of his 24 playoff contests. Suzuki, who represented Canada at the 2019 IIHF World Junior Hockey Championship, was originally a first round pick of the Vegas Golden Knights in 2017 before being dealt to Montreal in September 2018.