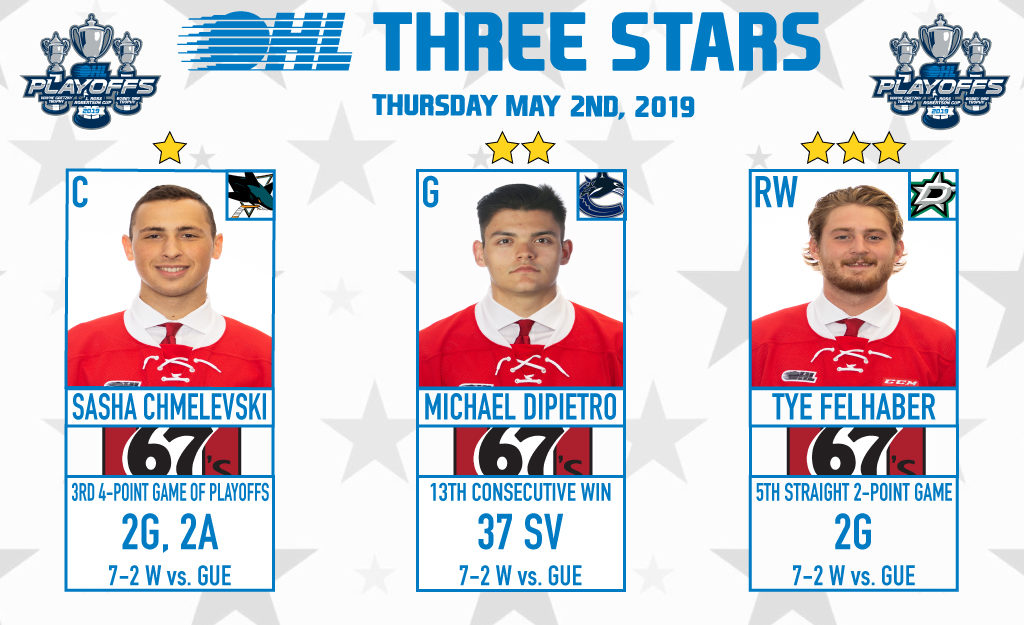 1ST STAR: SASHA CHMELEVSKI (OTTAWA 67’s):
San Jose Sharks prospect Sasha Chmelevski registered his third four-point game of the 2019 OHL Playoffs, scoring twice while adding two assists as the Ottawa 67’s overwhelmed the Guelph Storm in a 7-2 Game 1 victory on home ice. Chmelevski opened the scoring 3:46 into the first period before snapping a wrister over the shoulder of Anthony Popovich to open the floodgates midway through the third. The 19-year-old from Northville, Mich. has 14 points over his last seven games racking up 25 points (8-17–25) over 13 postseason contests. Chmelevski recorded 75 points (35-40–75) over 56 games this past season while also winning silver with the United States at the 2019 IIHF World Junior Hockey Championship. He was San Jose’s sixth round pick in 2017.

2ND STAR: MICHAEL DIPIETRO (OTTAWA 67’s):
Vancouver Canucks prospect Michael DiPietro turned in a 37-save performance, backstopping the Ottawa 67’s to a 7-2 victory in Game 1 of the Rogers OHL Championship Series. DiPietro held down the fort for Ottawa helping the 67’s tie an OHL record with their 13th consecutive playoff victory. The 19-year-old from Amherstburg, Ont. is 13-0 with a 2.24 goals-against average and .917 save percentage in these playoffs. DiPietro, who made his NHL debut with Vancouver earlier this season, was a third round pick of the Canucks in 2017.

3RD STAR: TYE FELHABER (OTTAWA 67’s):
Dallas Stars prospect Tye Felhaber put up his third straight two-goal effort, pacing the Ottawa 67’s to a 7-2 victory over the visiting Guelph Storm. In the midst of a 10-game point streak, Felhaber scored with 1:12 remaining in the first period before striking again with 6:48 left in the third. The 20-year-old from Pembroke, Ont. leads the 67’s in playoff goal-scoring with 13 tallies and 23 points over 13 games. Felhaber comes off a 109-point regular season that saw him score 59 goals. He was a free agent signing by Dallas in March.