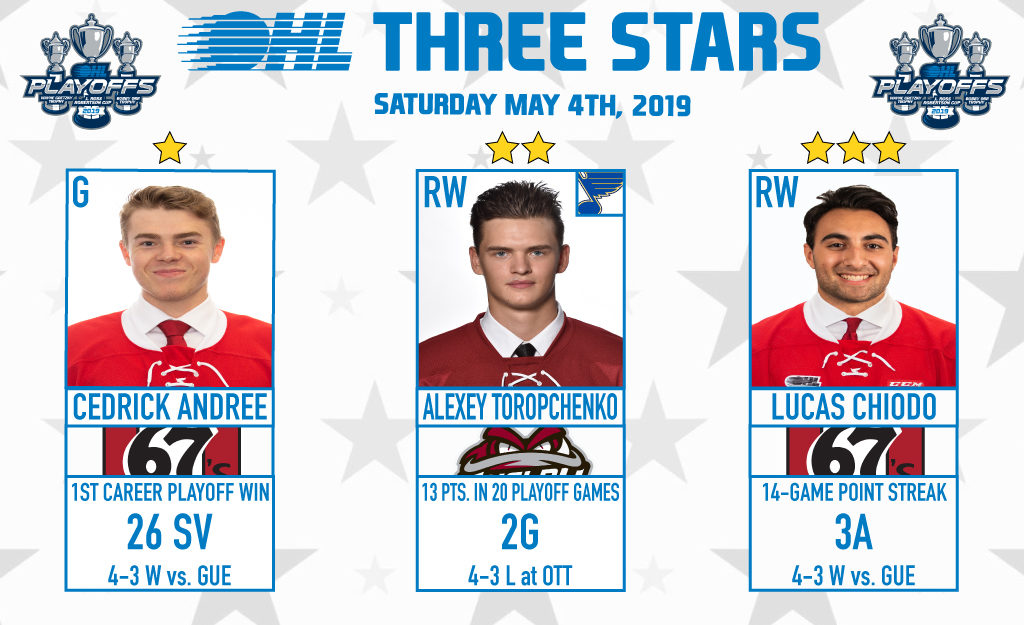 1ST STAR: CEDRICK ANDREE (OTTAWA 67’s):
Cedrick Andree‘s first career OHL playoff win came in an unexpected situation as the 18-year-old entered Saturday’s contest late in the first period, helping the 67’s climb out from under a 2-0 deficit with 26 saves in a 4-3 victory. Andree helped the 67’s fend off a fierce Guelph attack in the third period as they took a 2-0 series lead before a home crowd of 8,655. The Orleans, Ont. native becomes the first netminder in 20 years to stop at least 20 shots in a relief appearance and pick up the win in an OHL Championship contest. Andree played to. 34-5-2-2 record with a 2.48 goals-against average and .910 save percentage in 45 regular season contests. He was Ottawa’s 12th round pick in 2016.

2ND STAR: ALEXEY TOROPCHENKO (GUELPH STORM):
St. Louis Blues prospect Alexey Toropchenko has been a physical presence throughout the playoffs and showed off his goal scoring touch on Saturday, lighting the lamp twice as the Guelph Storm fell by a score of 4-3 in Ottawa. Toropchenko struck 12:59 into the first period to open the scoring on a power play one-timer. He scored again 1:15 into the third frame, jumping on his own rebound to bring the Storm within a goal. The 19-year-old from Moscow, Russia has 13 points (8-5–13) over 20 playoff contests. He registered 43 points (17-26–43) over 62 games this past season. He was St. Louis’ fourth round pick in 2017.