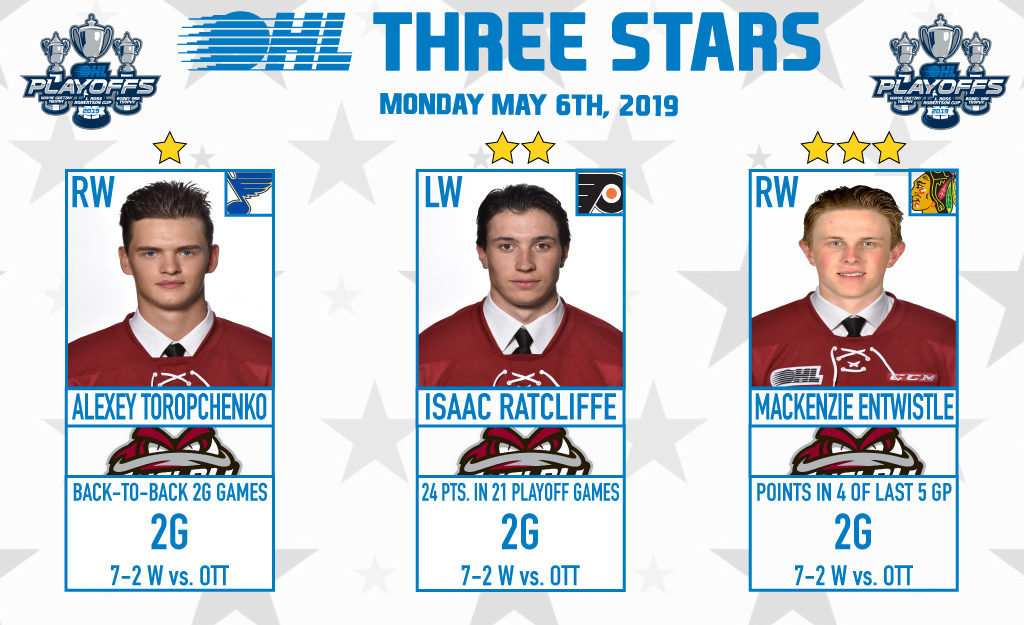 1ST STAR: ALEXEY TOROPCHENKO (GUELPH STORM):
St. Louis Blues prospect Alexey Toropchenko scored twice in a second straight contest, this time leading the Guelph Storm to a 7-2 win on home ice in Game 3. The 6-foot-3, 200Ib. winger made his presence felt physically and on the scoresheet, scoring midway through the first period before later adding a nice goal on a spin-around shot from the slot. The 19-year-old from Moscow, Russia has 15 points (10-5–15) over 21 playoff contests, helping the Storm hand the 67’s their first loss of the 2019 playoffs on Monday. Toropchenko was St. Louis’ fourth round pick in 2017.

2ND STAR: ISAAC RATCLIFFE (GUELPH STORM):
Guelph Storm captain Isaac Ratcliffe scored twice in Monday’s 7-2 win over the Ottawa 67’s, opening the scoring 4:08 into action before adding his second of the night with just over five minutes to go in the third. The Philadelphia Flyers prospect has 24 points (12-12–24) over 21 playoff games including a total of eight multi-point efforts. Ratcliffe put up 50 goals and 82 points over 65 games this past season. The 20-year-old from London, Ont. was Guelph’s first round pick in 2015 and was a second round pick of Philadelphia in 2017.

3RD STAR: MACKENZIE ENTWISTLE (GUELPH STORM):
Chicago Blackhawks prospect MacKenzie Entwistle scored a pair of third period goals to secure Guelph’s 7-2 win over the Ottawa 67’s in Game 3 of the Rogers OHL Championship Series. The 6-foot-3 winger from Georgetown, Ont. connected on a line with Ratcliffe and Nick Suzuki to increase his output to 19 points (7-12–19) over 21 playoff contests. An OHL champion with the Hamilton Bulldogs last spring, Entwistle recorded 57 points (30-27–57) over 57 games between Guelph and Hamilton this past season. Originally Arizona’s third round pick in 2017, Entwistle was dealt to Chicago in July 2018. Entwistle represented Canada at the 2019 IIHF World Junior Hockey Championship.