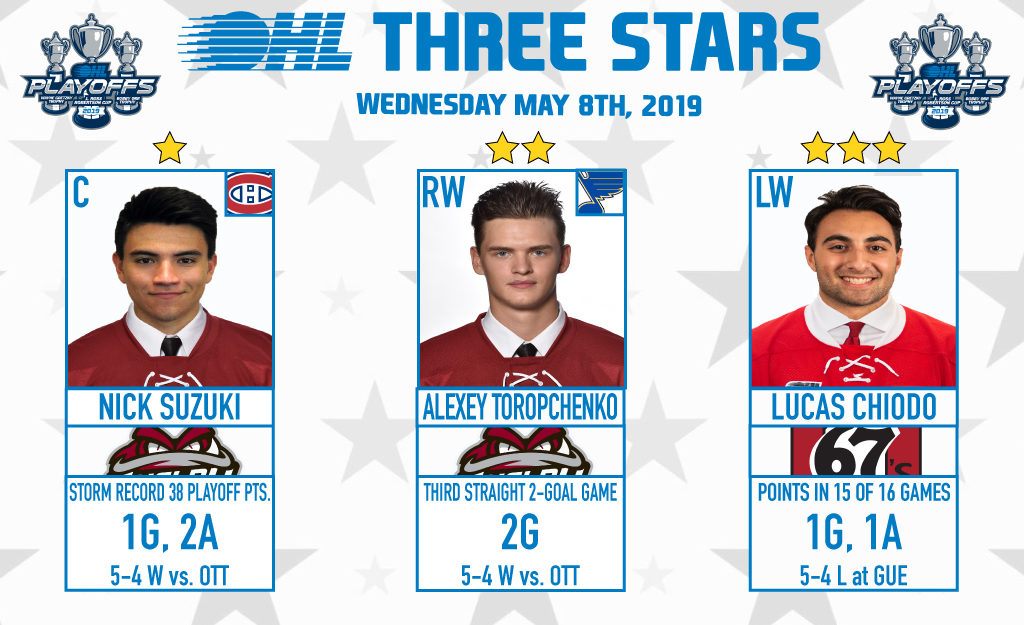 1ST STAR: NICK SUZUKI (GUELPH STORM):
Montreal Canadiens prospect Nick Suzuki made Guelph Storm history on Wednesday, recording his 38th point to surpass Martin St. Pierre (2004) for the most in a playoff season. Suzuki was dominant once again, recording his second straight three-point game as he scored his 15th of the postseason and added two assists. The League’s playoff scoring leader has points in 15 of his last 16 games, helping the Storm come back from three different 2-0 series deficits. Suzuki chipped in with assists on goals by Nate Schnarr and Liam Hawel on Wednesday as the Storm defeated the Ottawa 67’s 5-4. The 19-year-old from London, Ont. was recently named the OHL’s Most Sportsmanlike Player for a third straight year.

2ND STAR: ALEXEY TOROPCHENKO (GUELPH STORM):
St. Louis Blues prospect Alexey Toropchenko continues to be a factor for the Guelph Storm, scoring twice in a third straight game on Wednesday. Toropchenko helped the Storm defeat the Ottawa 67’s 5-4 and draw even at two in their best-of-seven Rogers OHL Championship Series matchup. The 19-year-old from Moscow, Russia has 17 points (12-5–17) over 22 playoff contests, also standing out as a physical presence along the boards and on the forecheck. He was St. Louis’ fourth round pick in 2017.