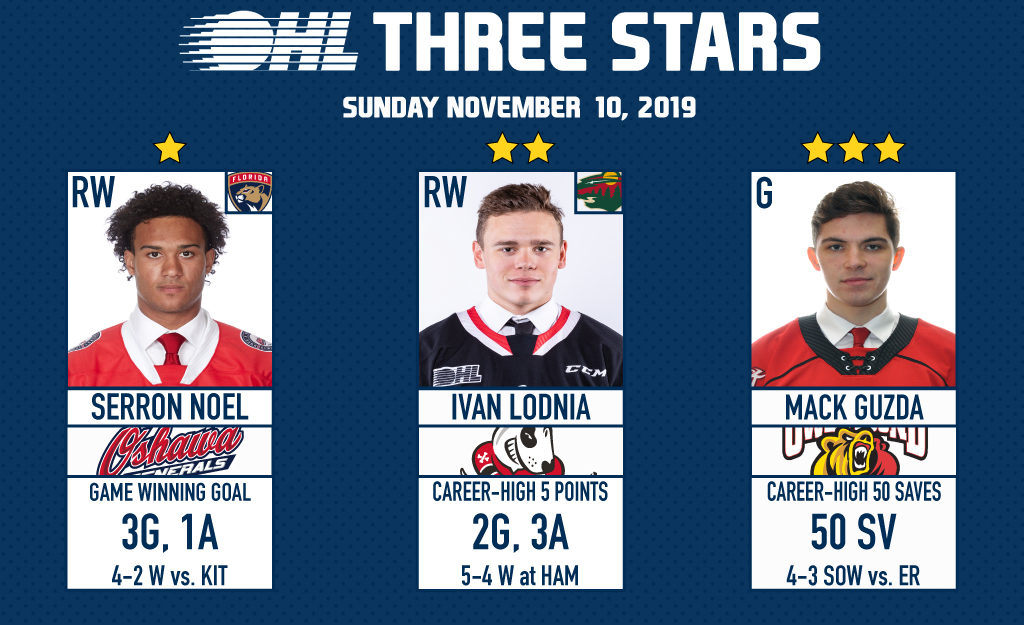 1ST STAR: SERRON NOEL (OSHAWA GENERALS) – 3G, 1A
Florida Panthers prospect Serron Noel recorded his third career OHL hat-trick on Sunday, helping the Oshawa Generals defeat visiting Kitchener 4-2. Noel tacked on an assist to get in on all four of Oshawa’s goals as the CHL’s fourth-ranked Generals closed out the weekend on top of the East Division with a 14-3-0-1 record. The 6-foot-6, 216Ib. native of Ottawa, Ont. has 13 points (8-5–13) over 13 games this season and will once again represent the OHL in the CIBC Canada Russia Series in London on Monday. Noel was Florida’s second round (34th overall) pick in the 2018 NHL Draft.
• HIGHLIGHTS

2ND STAR: IVAN LODNIA (NIAGARA ICEDOGS) – 2G, 3A
Minnesota Wild prospect Ivan Lodnia put up a career-high five points as the Niagara IceDogs broke out of their offensive funk with a 5-4 road win over the Hamilton Bulldogs. Lodnia scored twice, including once shorthanded while tacking on three assists as the IceDogs put consecutive shutout losses in their rearview mirror. Lodnia has 13 points (7-6–13) over nine games this season after starting out with the AHL’s Iowa Wild. The former OHL champion with the Erie Otters in 2017 was a third round pick of Minnesota in the 2017 NHL Draft.
• HIGHLIGHTS

3RD STAR: MACK GUZDA (OWEN SOUND ATTACK – 50 SV
Owen Sound Attack goaltender Mack Guzda turned aside a career-high 50 shots before stopping two of three in the shootout as the Bears defeated visiting Erie 4-3. Guzda’s 50 saves are the most by an Attack goaltender since Brandon Hope and Jack Flinn both reached the half-century mark in February 2014. The third-year native of Knoxville, Tenn. improves to 8-4-1-1 with a 2.80 goals-against average and .915 save percentage in 14 contests. Guzda is a two-time recipient of the OHL’s Ivan Tennant Memorial Award given to the league’s top academic secondary school student.
• HIGHLIGHTS