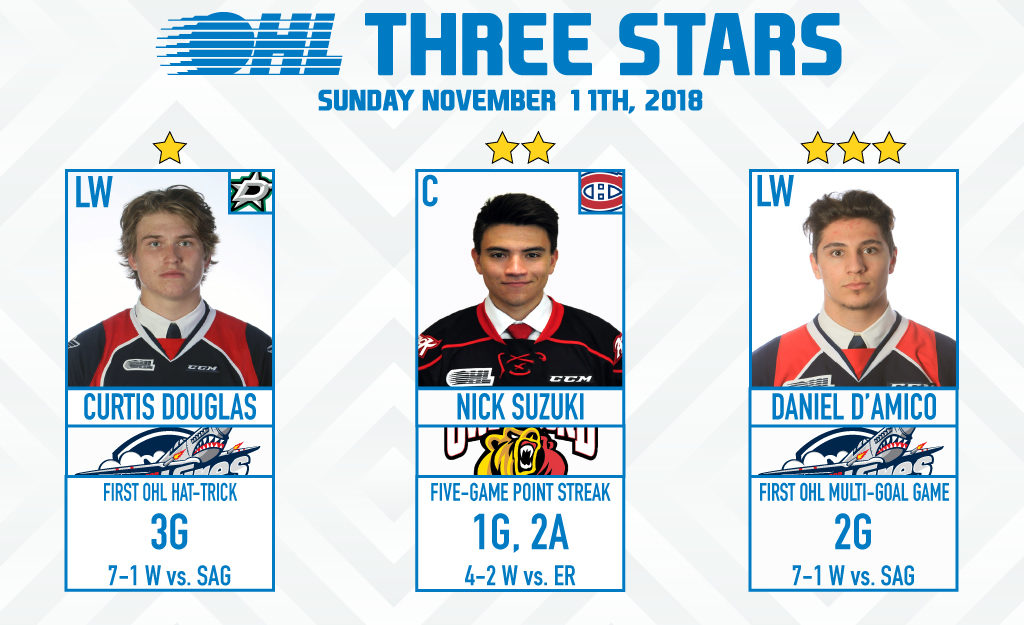 1ST STAR: CURTIS DOUGLAS (WINDSOR SPITFIRES):
Windsor Spitfires big man Curtis Douglas had a big day, netting his first OHL hat-trick to help the Windsor Spitfires defeat visiting Saginaw 7-1. Windsor’s fourth straight win saw Douglas net a natural hat-trick in a span of 4:22 as the Spits won big behind contributions from the 6-foot-9 Oakville, Ont. native. Douglas now has 12 points (9-3–12) over 19 games this season after being Dallas’ fourth round pick this past summer. He is a graduate of the Mississauga Senators Minor Midget program
• GAME HIGHLIGHTS

2ND STAR: NICK SUZUKI (OWEN SOUND ATTACK:
Owen Sound Attack captain Nick Suzuki had a goal and two assists for his club on Sunday, paving the way to a 4-2 win over the visiting Erie Otters. The Attack took a weekend set with the Otters on home ice as Suzuki pitched in with an assist on a goal by Carter Robertson before adding a primary assist on Kevin Hancock’s 15th goal of the season. Suzuki found the back of the net on the power play for the eventual game winner with 6:16 left in the second period. The Montreal Canadiens prospect has 30 points (16-14–30) over 18 games this season. He represented Team OHL in the CIBC Canada Russia Series in Sarnia last week.

3RD STAR: DANIEL D’AMICO (WINDSOR SPITFIRES):
Sophomore winger Daniel D’Amico wrapped up a productive weekend, scoring twice as the Windsor Spitfires skated to their fourth straight win. D’Amico has points in each of his last three games, potting a pair in Sunday’s 7-1 win over visiting Saginaw. The 17-year-old Caledon, Ont. native has 12 points (5-7–12) over 19 games this season. He was Windsor’s sixth round pick in the 2017 OHL Priority Selection from the Toronto Marlboros Minor Midgets.
• GAME HIGHLIGHTS