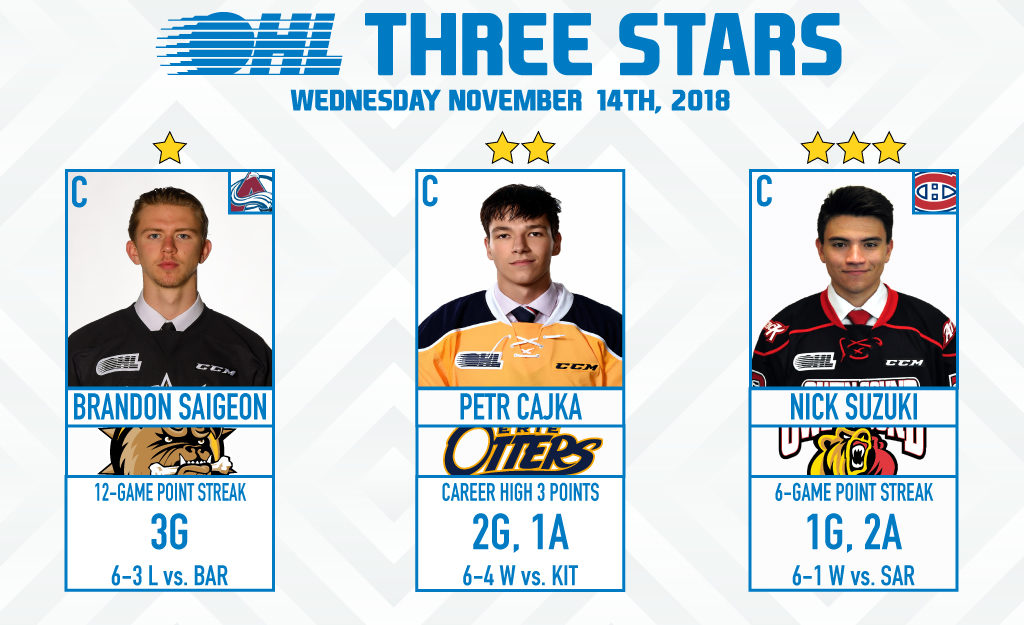 1ST STAR: BRANDON SAIGEON (HAMILTON BULLDOGS):
A natural hat-trick from Brandon Saigeon wasn’t enough to save the Hamilton Bulldogs on Wednesday as they fell behind the visiting Barrie Colts 4-0 and couldn’t come all the way back. Saigeon’s three cut the Barrie lead to one as Arthur Kaliyev and Matthew Strome both picked up assists on all three goals. Saigeon’s first hat-trick of the season was also accompanied by a diving save late in the game to prevent an empty net goal. The 20-year-old from Grimsby, Ont. has 34 points (15-19–34) over 20 games this season. He was a fifth round pick of the Colorado Avalanche this past summer.
• GAME HIGHLIGHTS

2ND STAR: PETR CAJKA (ERIE OTTERS):
Draft eligible Czech forward Petr Cajka put up a career-high three points in Erie’s 6-4 comeback win over the Kitchener Rangers on Wednesday morning. Cajka got the scoring started with the first shorthanded goal of his OHL career just 1:46 into action. He’d add his second goal of the game midway through the second period with assists from Kyle Maksimovich and Maxim Golod. The 17-year-old from Kadan, Czech Republic was the 12th overall pick of the 2018 CHL Import Draft. He has 15 points (6-9–15) over 20 games this season.
• GAME HIGHLIGHTS

3RD STAR: NICK SUZUKI (OWEN SOUND ATTACK):
Montreal Canadiens prospect Nick Suzuki was at his best on Wednesday, scoring and adding two assists as the Owen Sound Attack defeated visiting Sarnia 6-1. Suzuki scored 7:35 into the first period to give the Attack their first lead, one they’d never relinquish as he went on to add a pair of helpers. Suzuki had six shots on goal and went 15-for-21 in the faceoff circle as the Bears won their third straight contest. Suzuki stretched his current point streak to six games, giving him 33 points (17-16–33) over 19 games on the campaign. He recently captained Team OHL at the CIBC Canada Russia Series.
• GAME HIGHLIGHTS