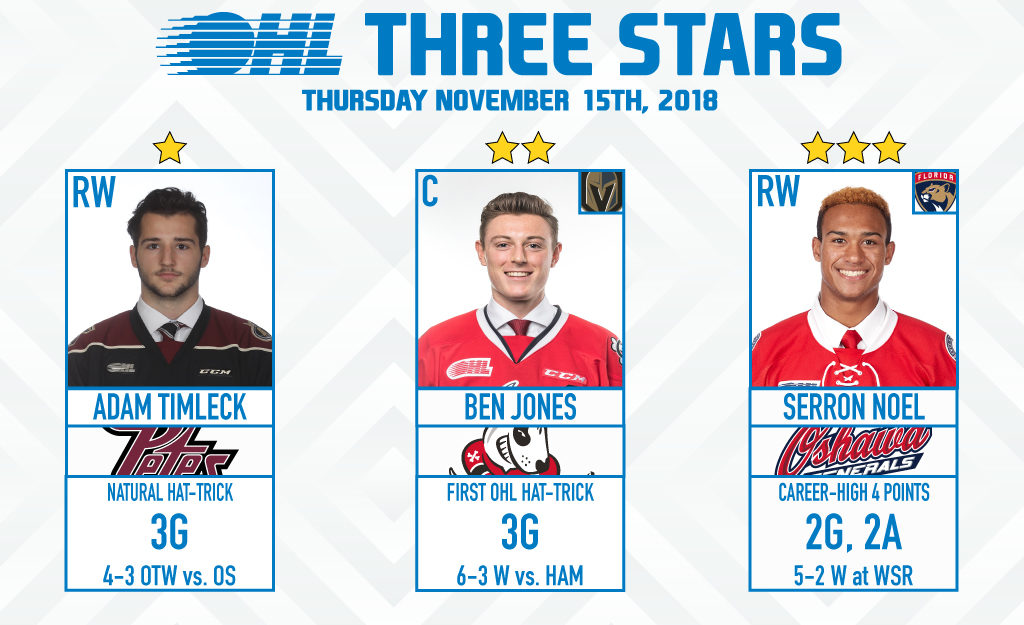 1ST STAR: ADAM TIMLECK (PETERBOROUGH PETES):
Fifth-year veteran Adam Timleck‘s first OHL hat-trick came in his 240th career contest, a natural one at that. Timleck opened the scoring with three goals in the game’s opening 35 minutes before the visiting Owen Sound Attack surged back to tie things in Peterborough. The Petes would take things 4-3 on an OT winner from Brady Hinz. Timleck connected with Hinz for his first goal before Pavel Gogolev was the primary catalyst on the other two. The 20-year-old Toronto, Ont. native is a former fourth round pick of the Petes back in 2014 from the Toronto Jr. Canadiens Minor Midgets where he played alongside such names as Jakob Chychrun, Victor Mete and Travis Barron.
• GAME HIGHLIGHTS

2ND STAR: BEN JONES (NIAGARA ICEDOGS):
Ben Jones also recorded his first OHL hat-trick on Thursday, helping the Niagara IceDogs double up visiting Hamilton 6-3. The Vegas Golden Knights prospect showed off his speed, scoring a pair of goals off the rush to give him a total of 10 on the season. The 19-year-old from Waterloo, Ont. connected twice with linemate Kirill Maksimov and now has 21 points (10-11–21) through 20 games. Jones recently represented the OHL in the CIBC Canada Russia Series.
• GAME HIGHLIGHTS