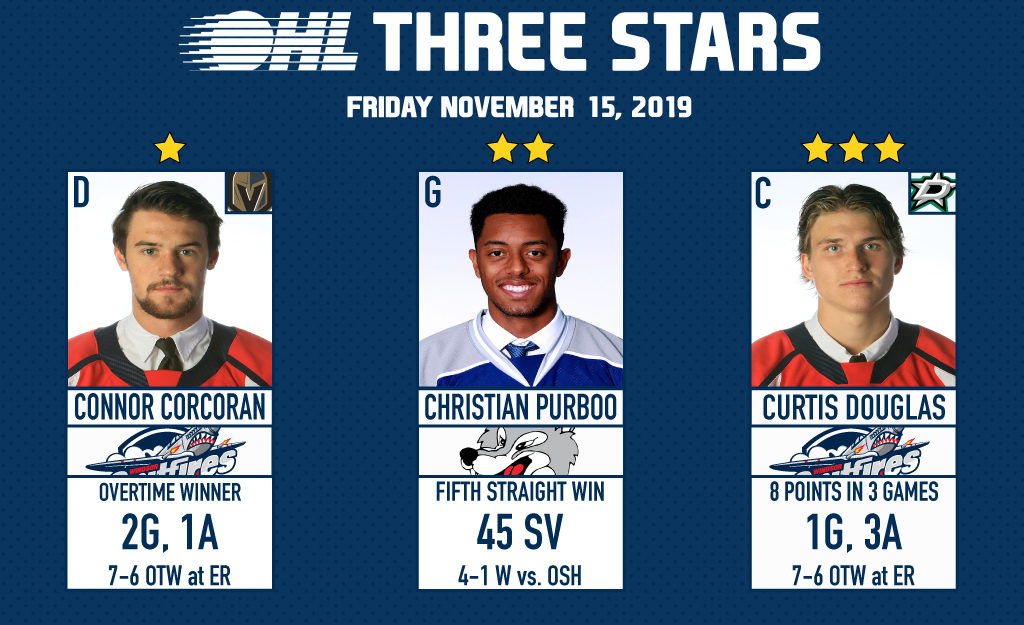 1ST STAR: CONNOR CORCORAN (WINDSOR SPITFIRES) – 2G, 1A, OT WINNER
Vegas Golden Knights prospect Connor Corcoran put up three points in the Spits’ thrilling overtime win over the Erie Otters, scoring the overtime winner on a slap shot just 46 seconds into the extra frame. Corcoran currently sits seventh in Windsor scoring with 16 points, on pace to blow past his career-high of 32 last season. The 19-year-old former Memorial Cup champion is in his fourth year with the Spitfires after originally being the club’s second round (21st overall) pick back in 2016.
• HIGHLIGHTS

2ND STAR: CHRISTIAN PURBOO (SUDBURY WOLVES) – 45 SV
Christian Purboo helped his Sudbury Wolves blow past the Oshawa Generals 4-1, stopping 45 of their 46 shots to earn his fifth consecutive win. The 6-foot-3 Oakville, Ont. native was acquired from the North Bay Battalion prior to the start of the season and has had a strong run with Sudbury, boasting an 11-3-0-0 record to go with a 2.87 goals-against average and .905 save percentage this season. Purboo recently earned his first career shutout in a 2-0 win over the Niagara IceDogs last weekend.
• HIGHLIGHTS

3RD STAR: CURTIS DOUGLAS (WINDSOR SPITFIRES) – 1G, 3A
Big 6-foot-9 centreman Curtis Douglas earned his second career four-point night, scoring a goal and three assists against the Erie Otters in Windsor’s big 7-6 overtime road win. The Oakville, Ont. native tied the game up with just 22 seconds left in regulation, before Connor Corcoran won it for the Spitfires in OT. Douglas was drafted by the Dallas Stars in the fourth round of the 2018 NHL Draft and, with 19 points, is currently second in Windsor scoring behind Tyler Angle’s 26.
• HIGHLIGHTS