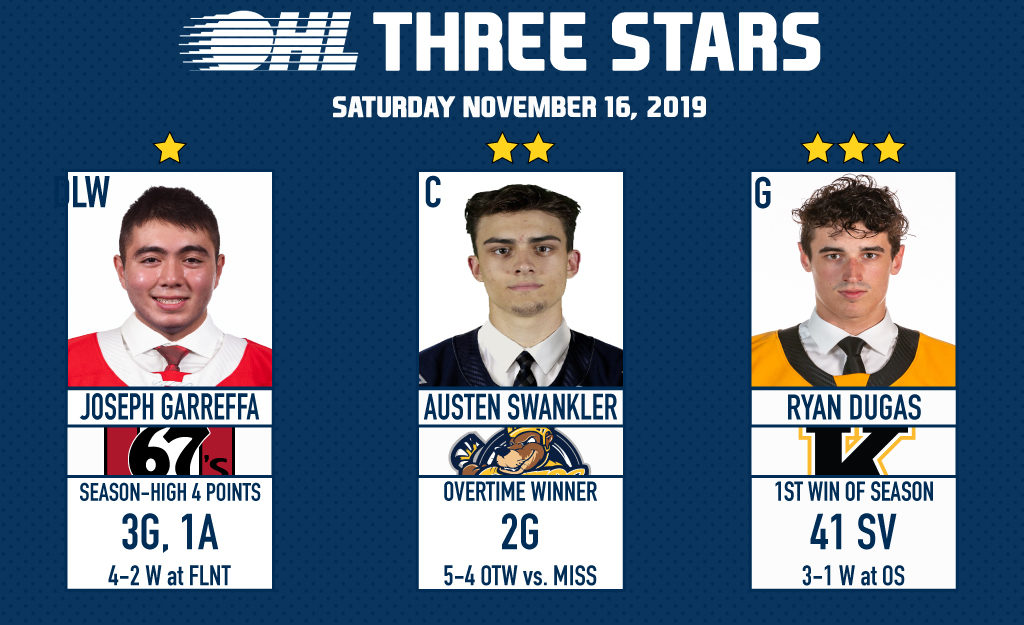 1ST STAR: JOSEPH GARREFFA (OTTAWA 67’s) – 3G, 1A
Overage winger Joseph Garreffa scored three times and added an assist, getting in on all four Ottawa 67’s goals in a 4-2 road win over the Flint Firebirds. The season-high four-point effort gives Garreffa 17 points (10-7–17) in as many games this season. The fifth-year OHL forward spent the first four seasons of his OHL career as a member of the Kitchener Rangers. Garreffa has amassed 242 points (82-160–242) over 255 career regular season games.
• HIGHLIGHTS

2ND STAR: AUSTEN SWANKLER (ERIE OTTERS) – 2G, OT WINNER
First-year Erie Otters forward Austen Swankler tied things up with 1:18 left in the third period before scoring the overtime winner with six seconds to spare in the extra frame, guiding the Otters to a 5-4 win over visiting Mississauga. Swankler built off Friday’s three-point effort, banging in a pair of goals to give him 20 points (7-13–20) over 21 games this season. The 18-year-old from North Huntingdon, Penn. was acquired from the Ottawa 67’s over the summer after spending the 2018-19 season in the USHL.
• HIGHLIGHTS

3RD STAR: RYAN DUGAS (KINGSTON FRONTENACS) – 41 SV
Ryan Dugas turned aside 41 shots to help the Kingston Frontenacs end a 12-game drought with their first win since October 11th. Dugas pushed the Fronts past the Owen Sound Attack 3-1 on the road, earning his first win of the season as Kingston was outshot 42-30. A former OHL Cup champion with the Mississauga Reps in 2017, Dugas is in the midst of his second OHL season after being Kingston’s fourth round (68th overall) pick in the 2016 OHL Priority Selection.
• HIGHLIGHTS