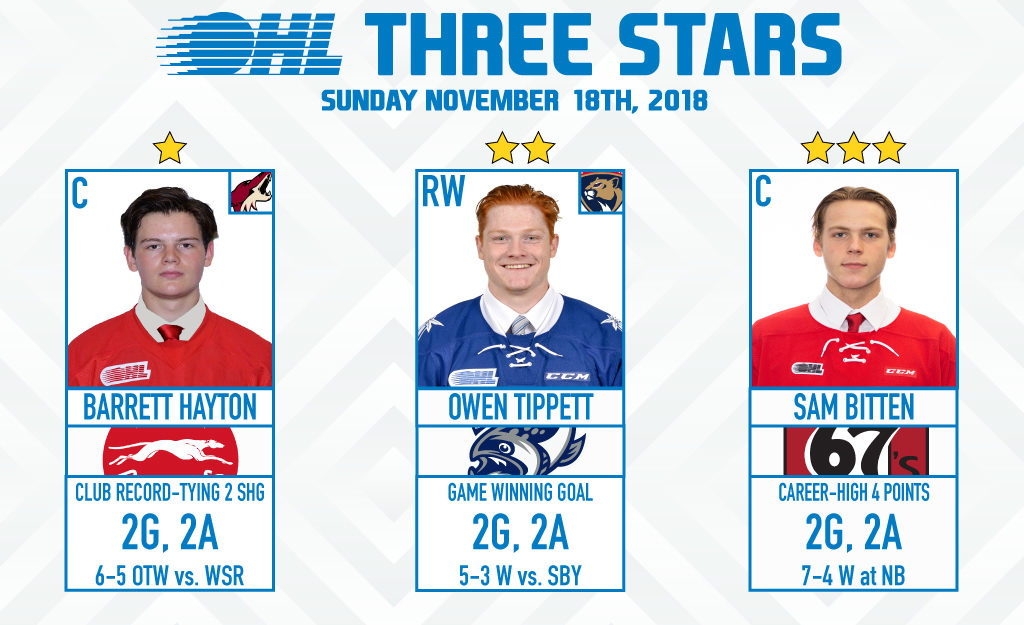 1ST STAR: BARRETT HAYTON (SAULT STE. MARIE GREYHOUNDS):
Arizona Coyotes prospect Barrett Hayton turned in a career-high four point performance on Sunday, helping the Soo Greyhounds sneak by visiting Windsor 6-5 in overtime. Hayton tied a Greyhounds franchise record with two shorthanded goals before adding two assists, one coming on Morgan Frost’s game winner 15 seconds into overtime. Hayton extends his point streak to nine games and has at least one point in 15 of his 16 games this season. The 18-year-old centreman from Peterborough, Ont. recently represented the OHL in the CIBC Canada Russia Series. He was the fifth overall pick of the 2018 NHL Draft.
• GAME HIGHLIGHTS

2ND STAR: OWEN TIPPETT (MISSISSAUGA STEELHEADS):
Florida Panthers prospect Owen Tippett joined Hayton with two goals and two assists on Sunday, scoring the game winner as the Mississauga Steelheads defeated visiting Sudbury 5-3. Tippett’s winner came 2:54 into the third period before he later added an insurance goal to put things out of reach and help the Steelheads maintain their lead in the Central Division. The 19-year-old from Peterborough, Ont. racked up 11 shots on goal in the win and has a total of 26 points (16-10–26) over 16 games this season. Tippett was the 10th overall pick of the 2017 NHL Draft and has played a total of seven regular season games with the Panthers.
• GAME HIGHLIGHTS

3RD STAR: SAM BITTEN (OTTAWA 67’s):
Ottawa 67’s forward Sam Bitten stepped up for a career-high four points on Sunday as the Barber Poles defeated the North Bay Battalion 7-4 on the road. Bitten built off a strong showing on Friday when he scored twice in an 8-2 win over the Soo Greyhounds. The 18-year-old product of Gloucester, Ont. scored a pair of third period goals to put things out of reach on Sunday and finished with a plus-4 rating, bringing his season total to 12 points (6-6–12) over 25 games. The younger brother of recent OHL grad and 2018 OHL champion Will Bitten, Sam was Ottawa’s fifth round pick in the 2016 OHL Priority Selection.
• GAME HIGHLIGHTS