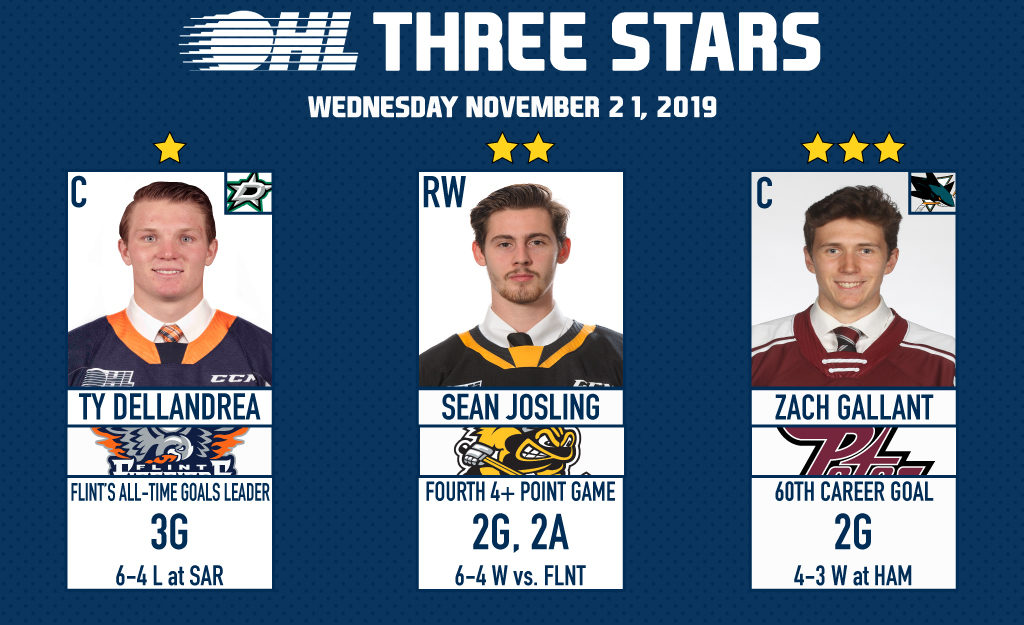 1ST STAR: TY DELLANDREA (FLINT FIREBIRDS) – 3G
Dallas Stars prospect Ty Dellandrea recorded the second hat-trick of his OHL career and climbed into first on the Flint Firebirds’ all-time goal scoring list as Flint fell 6-4 in Sarnia on Wednesday. Dellandrea scored three power play goals, capping-off the run with the 73rd of his OHL career to surpass Ryan Moore on the Firebirds’ franchise list. Dellandrea has 23 points (11-12–23) through 19 games this season. The Port Perry, Ont. native was the 13th overall pick of the 2018 NHL Draft and made his pro debut with the AHL’s Texas Stars last spring.
• HIGHLIGHTS

2ND STAR: SEAN JOSLING (SARNIA STING) – 2G, 2A
Overage winger Sean Josling recorded at least four points for the fourth time this season as the Sarnia Sting came back to defeat the Flint Firebirds 6-4 on home ice. Josling tied the game at three with 5:21 left in the second period and tacked on his 21st goal of the season with an empty netter. The 20-year-old also tacked on two assists to give him the OHL’s fifth-highest point total of 42 (21-21–42) through 21 games this season. Josling attended rookie camp with the Chicago Blackhawks in September.
• HIGHLIGHTS

3RD STAR: ZACH GALLANT (PETERBOROUGH PETES) – 2G
San Jose Sharks prospect Zach Gallant scored twice as the Peterborough Petes defeated the host Hamilton Bulldogs 4-3 in a School Day game on Wednesday. Gallant struck on the power play 7:02 into the second period before putting the Petes up 3-2 with 1:38 left in the frame. The Petes captain has 22 points (10-12–22) over 22 games in this, his fifth OHL season. The Oakville, Ont. product was signed as a free agent by San Jose this past summer. He was a third round pick of the Detroit Red Wings back in 2017.
• HIGHLIGHTS