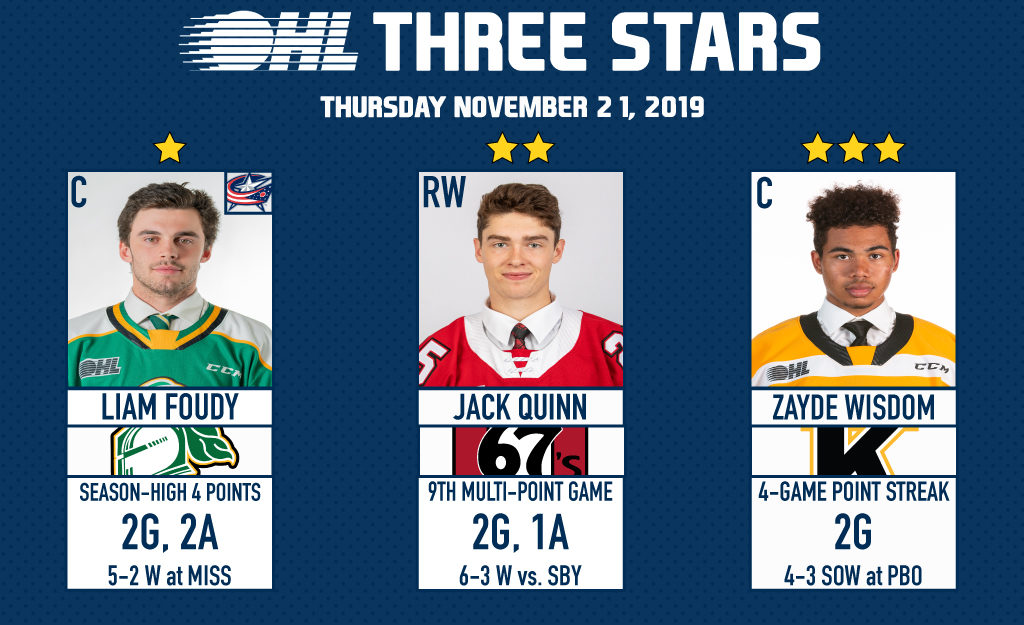 LIAM FOUDY (LONDON KNIGHTS) – 2G, 2A
Liam Foudy came up big for the Knights in their 5-2 win in Mississauga on Thursday. The 6-foot-1 winger from Scarborough, Ont. collected a season-high four points including two goals and two assists on the night, bringing his season total up to 18 (10-8–18). Foudy was selected 18th overall by the Columbus Blue Jackets in 2018 and, shortly after, signed an entry-level contract. He recently suited up for Team OHL in the CIBC Canada Russia Series.
• HIGHLIGHTS

JACK QUINN (OTTAWA 67’S) – 2G, 1A
All eyes were on 18-year-old Jack Quinn Thursday morning in the nation’s capital. The Cobden, Ont. native got two on the board for Ottawa in the morning’s School Day game against Sudbury, lifting the 67’s to a 6-3 win. Quinn, who continues to impress leading up to the 2020 NHL Draft next summer, sits fifth in Ottawa scoring, on pace to blow last year’s 32-point total out of the water. Quinn was recently elevated from a ‘B’ rating assigned on October’s NHL Central Scouting Players to Watch List up to an ‘A’ in November.
• HIGHLIGHTS

ZAYDE WISDOM (KINGSTON FRONTENACS) – 2G
Zayde Wisdom’s two goals led the Kingston Frontenacs to a 4-3 shootout win in Peterborough. The 5-foot-9, 195Ib. winger now has points in his last four games (4-1-5) and leads the Frontenacs in scoring with 17 points (12-5–17) on the season, surpassing his previous year’s total of 10 points in 60 games. Wisdom was selected by the Frontenacs in the fourth round of the 2018 OHL Priority Selection.
• HIGHLIGHTS