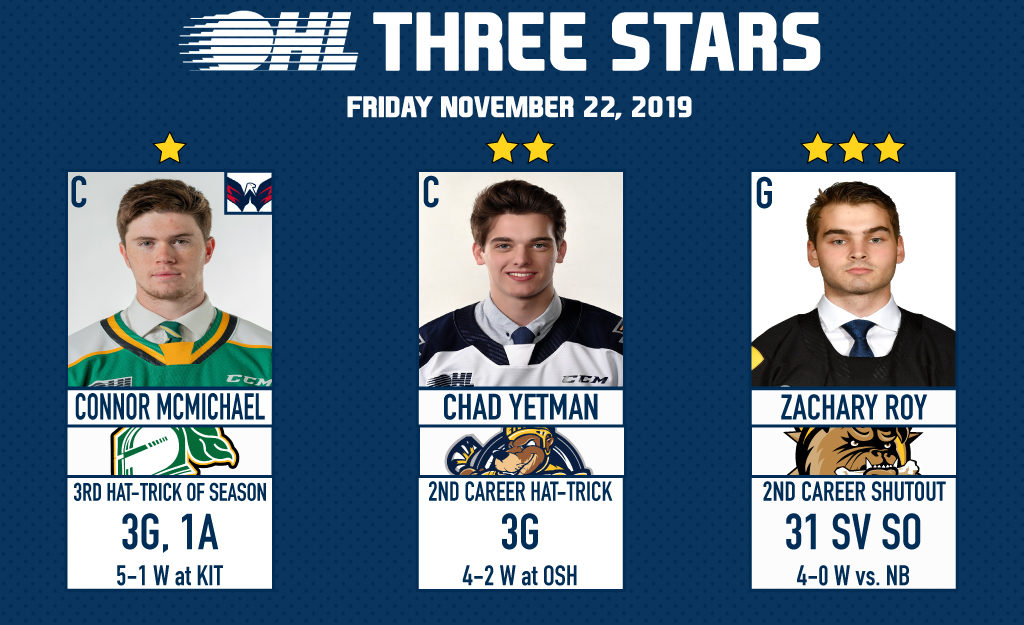 1ST STAR: CONNOR MCMICHAEL (LONDON KNIGHTS) – 3G, 1A
Connor McMichael’s hat-trick and electric four-point night led the London Knights to a 5-1 victory in Kitchener. The Washington Capitals prospect’s third hatty of the season pushed the Knights to their third straight win. McMichael has now reached an impressive feat of 50 points in just 20 games played, and continues to sit atop the OHL scoring list. McMichael’s was Washington’s first round (25th overall) pick this past summer.
• HIGHLIGHTS

2ND STAR: CHAD YETMAN (ERIE OTTERS) – 3G
Whitby, Ont. native Chad Yetman put up his second career hat-trick in nearby Oshawa as the Erie Otters skated to a 4-2 road win over the Generals. Yetman’s 18 goals lead the Otters as the 19-year-old is on pace to smash his career-high of 21 from last season. The 5-foot-11, 178Ib. forward was drafted by the Otters in the 10th round of the 2016 OHL Priority Selection and attended training camp with the Detroit Red Wings this past September.
• HIGHLIGHTS

ZACHARY ROY (HAMILTON BULLDOGS) – 31 SAVE SHUTOUT
Hamilton’s Zachary Roy earned his second career OHL shutout in a 4-0 blanking of the North Bay Battalion. The 5-foot-11 netminder faced 31 shots in Friday’s win as the Bulldogs were outshot but managed to prevail and improve to 11-13-1-0. Drafted by the Bulldogs in the fourth round of the 2017 OHL Priority Selection, the Callander, Ont. native currently owns an .884 save percentage and 3.89 goals- against-average in 10 games.
• HIGHLIGHTS