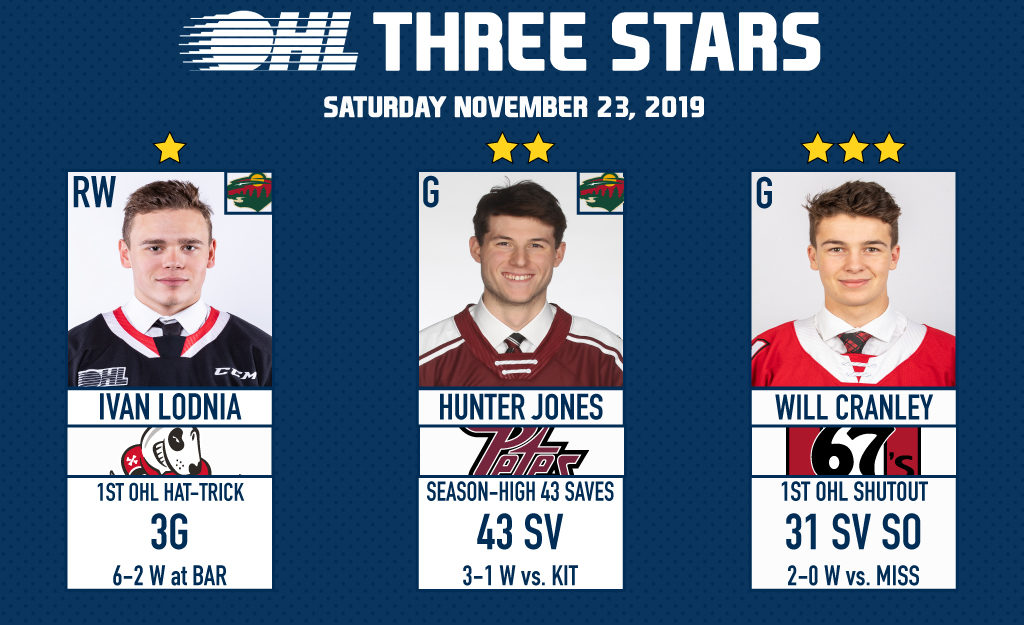 1ST STAR: IVAN LODNIA (NIAGARA ICEDOGS) – 3G
Minnesota Wild prospect Ivan Lodnia recorded his first career OHL hat-trick, finishing it off on a third period breakaway as the Niagara IceDogs skated to their third straight win. The Dogs defeated the Barrie Colts 6-2 on the road as Lodnia had a goal in each period to give him 23 points (12-11–23) over 13 games since being returned from the AHL’s Iowa Wild. Lodnia is in the midst of a five game point streak, with each outing producing multi-point results. Now in his fifth OHL season, Lodnia is a former OHL champion with the Erie Otters in 2017. He’s amassed 223 (91-132–223) career regular season points over 244 career contests. He was Minnesota’s third round pick in 2017.
• HIGHLIGHTS

2ND STAR: HUNTER JONES (PETERBOROUGH PETES) – 43 SV
Another Minnesota Wild prospect, Peterborough Petes goaltender Hunter Jones turned aside 43 of the 44 shots he faced as the Peterborough Petes defeated visiting Kitchener 3-1. Jones’ Petes were outshot 44-38 in the win as the 19-year-old from Brantford, Ont. did his part, seeing his shutout bid ended with just 1:47 remaining in the third period. Jones is now 15-3-1-0 on the season with a 2.70 goals-against-average and .912 save percentage. The 6-foot-4, 198Ib. netminder was a second round pick of the Wild this past summer. He recently represented Team OHL in the CIBC Canada Russia Series.
• HIGHLIGHTS

3RD STAR: WILL CRANLEY (OTTAWA 67’s) – 31 SV SO
Second-year Ottawa 67’s netminder Will Cranley posted his first career OHL shutout before a national audience on Sportsnet. Cranley stopped all 31 shots he faced as the 67’s blanked visiting Mississauga 2-0. The 17-year-old from Peterborough, Ont. improves to 5-1-0-0 on the season. Cranley was a second round pick of the 67’s in the 2018 OHL Priority Selection. The 6-foot-4, 185Ib. netminder is eligible for the 2020 NHL Draft.
• HIGHLIGHTS