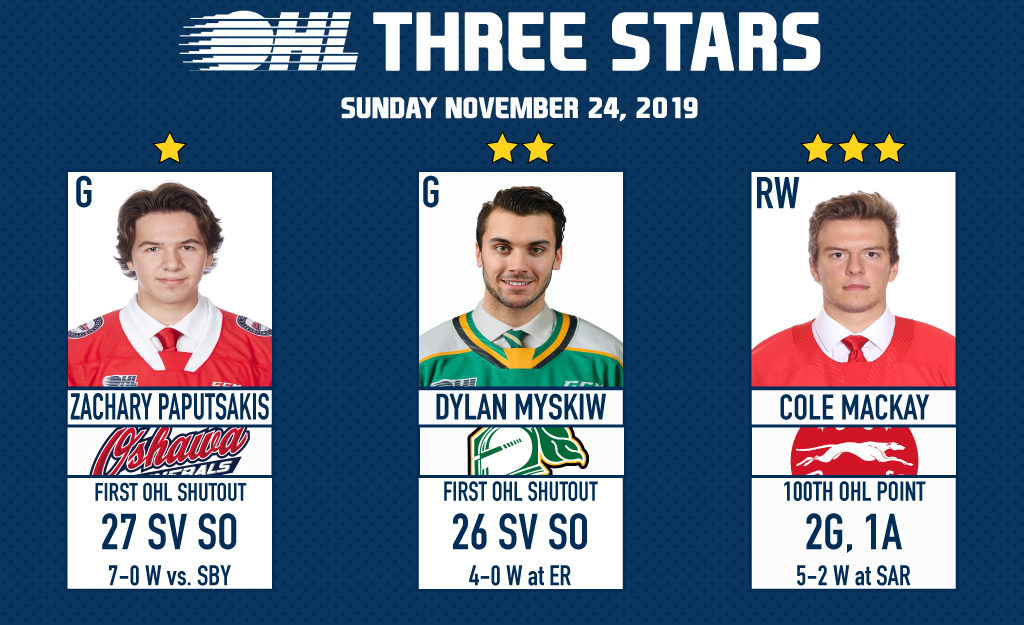 1ST STAR: ZACHARY PAPUTSAKIS (OSHAWA GENERALS) – 27 SV SO
Oshawa goaltender Zachary Paputsakis held the Sudbury Wolves at bay on Sunday as the Oshawa Generals skated to a 7-0 win on Sportsnet. The 18-year-old Rockland, Ont. native turned aside all 27 shots he faced for his first career OHL shutout, improving to 5-2-0-1 through 11 games this season. The 6-foot-3, 187Ib. netminder is a former fifth round pick of the Generals in the 2017 OHL Priority Selection.
• HIGHLIGHTS

2ND STAR: DYLAN MYSKIW (LONDON KNIGHTS) – 26 SV SO
Overage goaltender Dylan Myskiw earned his first OHL shutout against the Erie Otters as he backstopped the London Knights to a 4-0 road victory and fourth straight win. The Winnipeg, Man. native is 7-1-0-0 with a 2.20 goals-against average and .930 save percentage in eight games with the Knights. The 6-foot-1, 180Ib. netminder spent three seasons in the WHL between Victoria, Brandon and Edmonton, registering one shutout there prior to being claimed off waivers by the Sarnia Sting and acquired by London.
• HIGHLIGHTS

3RD STAR: COLE MACKAY (SOO GREYHOUNDS) – 2G, 1A
Cole MacKay’s three points led the Soo Greyhounds to a 5-2 road win to close out the weekend in Sarnia. MacKay recorded his 100th career OHL point as the Greyhounds improved to 10-14-1-0. The third-year Sault Ste. Marie, Ont. native is one of three 26-point scorers on the Hounds, recording 12 goals and 14 assists over 25 games. The former fifth round pick of the Hounds in 2017 attended rookie camp with the Vegas Golden Knights in September.
• HIGHLIGHTS