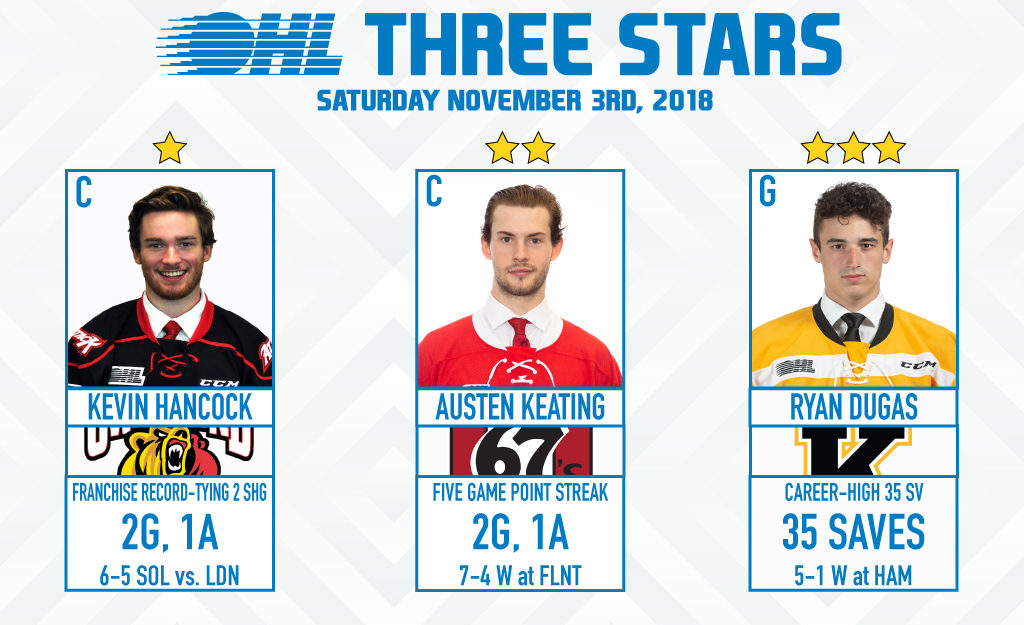 1ST STAR: KEVIN HANCOCK (OWEN SOUND ATTACK):
Kevin Hancock tied an Owen Sound Attack single-game record with two shorthanded goals, giving him multi-point efforts in seven of his last eight contests. Hancock had two goals and an assist as the Attack fell to the visiting London Knights 6-5 in a shootout. The overage centreman was his usual dominant self in the faceoff circle, winning 14 of the 23 draws he took while also registering nine shots on goal. The Mississauga, Ont. native has 28 points (14-14–28) through 17 games this season. He attended training camp with the Buffalo Sabres this past September.
• GAME HIGHLIGHTS

2ND STAR: AUSTEN KEATING (OTTAWA 67’s):
Veteran forward Austen Keating continued a five-game point streak, scoring twice while adding an assist in a 7-4 Ottawa 67’s road win in Flint. Keating joined teammate Graeme Clarke with two goals as he brought his season total to 29 points (6-23–29) through 18 games. The 19-year-old from Guelph, Ont. is in his fourth year with the 67’s after being the club’s first round pick in the 2015 OHL Priority Selection.
• GAME HIGHLIGHTS

3RD STAR: RYAN DUGAS (KINGSTON FRONTENACS):
Hamilton, Ont. native Ryan Dugas had a nice homecoming, turning aside 35 of 36 shots as the Kingston Frontenacs defeated the Hamilton Bulldogs 5-1 on the road. The 17-year-old had a shutout going into the third period before Bulldogs veteran Brandon Saigeon scored midway through the final frame. Kingston’s fourth round pick in 2017 from the OHL Cup champion Mississauga Reps, Dugas is 3-2 this season with a 2.95 goals-against average and a .909 save percentage.
• GAME HIGHLIGHTS