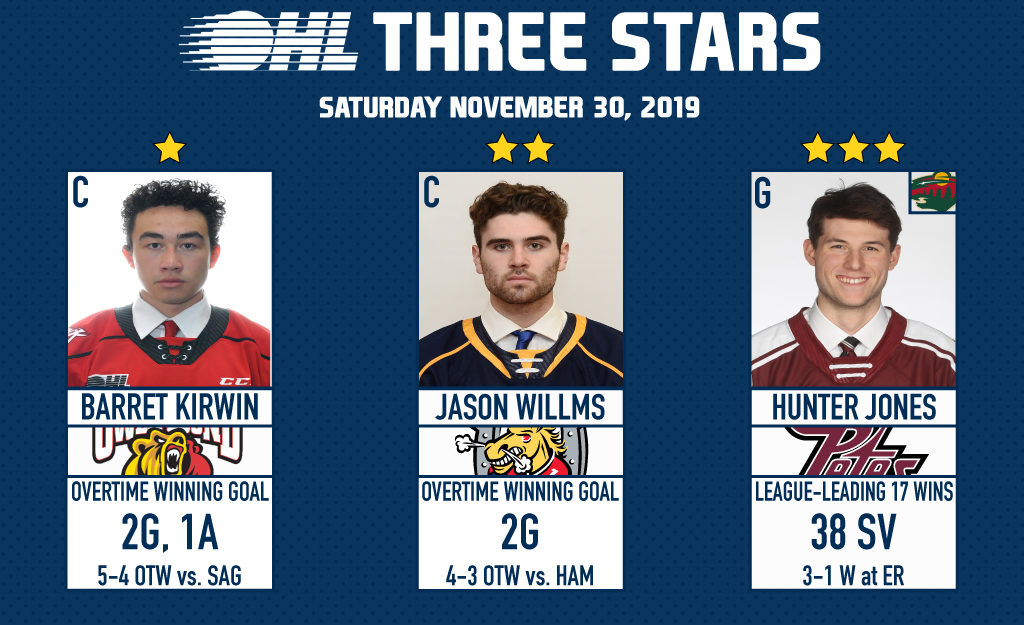 1ST STAR: BARRET KIRWIN (OWEN SOUND ATTACK) – 2G, 1A
Barret Kirwin scored his second of the night 58 seconds into overtime as the Owen Sound Attack ended a seven-game drought, defeating visiting Saginaw 5-4. Kirwin finished the night with two goals and an assist to go with eight shots on goal and a 16-for-23 rate in the faceoff circle. He has points in five of his last six games for a season total of 26 (12-14–26) over 25 contests. The 19-year-old native of Barrie, Ont. is in the midst of his fourth OHL season after originally being a sixth round pick of the Guelph Storm in the 2016 OHL Priority Selection.
• HIGHLIGHTS

2ND STAR: JASON WILLMS (BARRIE COLTS) – 2G
Barrie Colts captain Jason Willms scored his second of the night with 1:26 left in overtime as the Barrie Colts edged the Hamilton Bulldogs 4-3, ending a three-game slide. Willms took a feed from fellow Colts veteran Aidan Brown to beat an outstretched Marco Costantini for the game winner. The 20-year-old Kitchener, Ont. product is in the midst of his fourth season with the Colts and has played in 227 consecutive regular season contests. Willms has 26 points (9-17–26) over 23 games this season. He was originally Barrie’s third round pick in the 2015 OHL Priority Selection from the Kitchener Jr. Rangers Minor Midgets.
• HIGHLIGHTS

3RD STAR: HUNTER JONES (PETERBOROUGH PETES) – 38 SV
Minnesota Wild prospect Hunter Jones stopped 38 of the 39 shots that came his way on Saturday night in Erie as the Peterborough Petes beat the Otters 3-1. Hayden Fowler beat Jones with 1:19 remaining in the opening frame to send the teddy bears to the ice at Erie Insurance Arena, but that’s all the offence the Otters would generate against Jones as he was perfect the rest of the way. The third-year veteran has now won four straight starts, improving to 17-3-1-0 with a 2.63 goals-against-average and .914 save percentage over 21 appearances. Jones was a second round pick of Minnesota this past summer and recently represented the OHL in the CIBC Canada Russia Series.
• HIGHLIGHTS