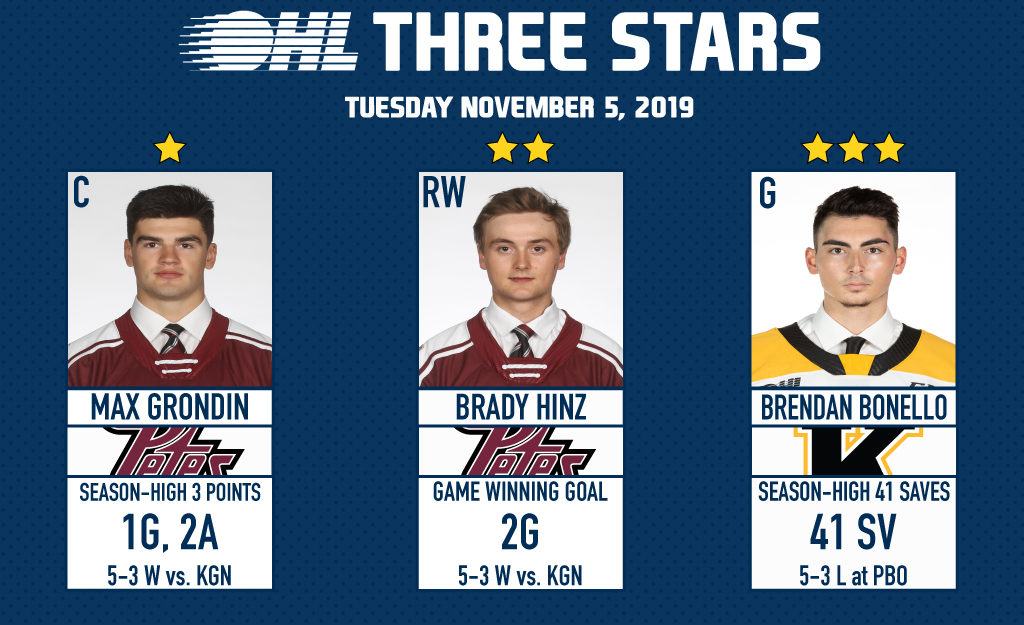 1ST STAR: MAX GRONDIN (PETERBOROUGH PETES) – 1G, 2A
Max Grondin had a goal and two assists to earn first star honours as the Peterborough Petes battled back to defeat visiting Kingston 5-3. The 6-foot-4, 205Ib. forward registered a season-high three points to bring his production totals to 12 points (4-8–12) over 17 games this season. A 19-year-old native from Hearst, Ont., Grondin is in the midst of his fourth OHL season after originally being a second round pick of the Saginaw Spirit in 2016.

2ND STAR: BRADY HINZ (PETERBOROUGH PETES) – 2G
Brady Hinz tied things up with 3:03 left in the second period before netting the winner 1:35 into the third, banging in a rebound off the crossbar. Hinz has 11 points (6-5–11) through 15 games in this, his fourth OHL season. The 19-year-old from Stratford, Ont. has split his OHL career between the Petes and Sarnia Sting who selected him in the third round of the 2016 OHL Priority Selection.

3RD STAR: BRENDAN BONELLO (KINGSTON FRONTENACS) – 41 SV
Kingston Frontenacs netminder Brendan Bonello was kept busy on Tuesday, turning aside 41 shots in a 5-3 road loss to the Peterborough Petes. The fourth-year goaltender from Mississauga, Ont. fell to 1-7-2-1 on the season, playing behind a young Frontenacs team that was without star rookie Shane Wright on Tuesday. A former third round pick of the Saginaw Spirit in 2015, Bonello helped keep the Fronts in the game despite their being outshot 46-26.