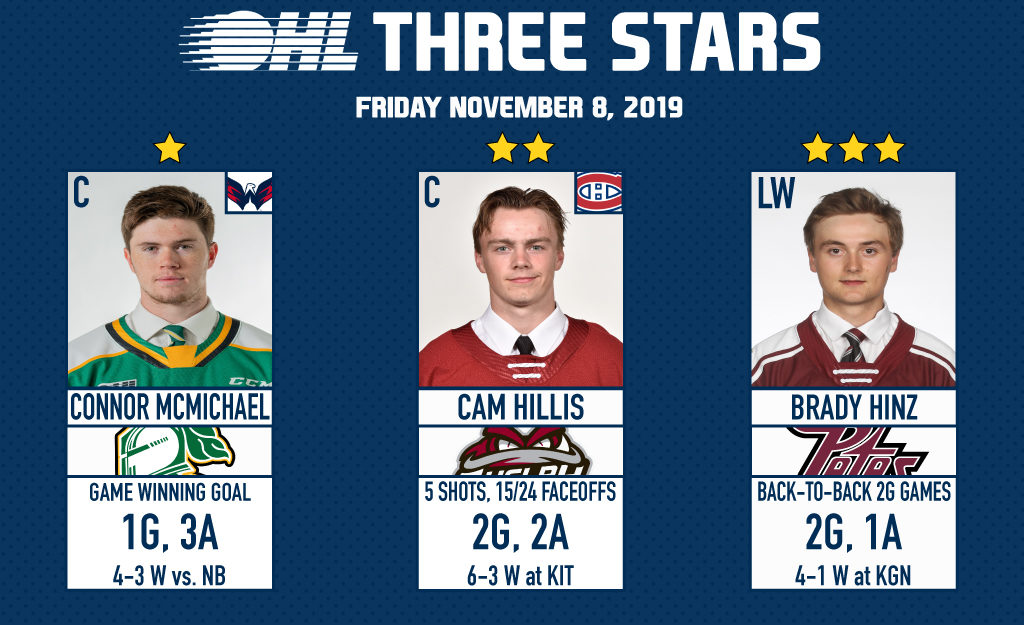 1ST STAR: CONNOR McMICHAEL (LONDON KNIGHTS) – 1G, 3A
Reigning OHL ‘On the Run’ Player of the Week Connor McMichael continued his tear across the scoresheet, recording three primary assists before striking for the game winner with 1:05 remaining as the London Knights defeated visiting North Bay 4-3. McMichael’s seventh consecutive multi-point game included eight shots on goal and an 8-for-13 performance in the faceoff circle as the Knights climbed to the top of the Midwest Division with their fourth straight win. McMichael took over the OHL scoring lead as he now has 38 points (18-20–38) in 15 games this season. The Washington Capitals first round pick scored a goal in Thursday’s Team OHL win at the 2019 CIBC Canada Russia Series.
• HIGHLIGHTS

2ND STAR: CAM HILLIS (GUELPH STORM) – 2G, 2A
Montreal Canadiens prospect Cam Hillis had two goals, two assists and went 15-for-24 in the faceoff circle as the Guelph Storm scored a 6-3 road win over the Midwest Division rival Kitchener Rangers. Hillis, who played in Guelph as a member of Team OHL on Thursday, scored with 1:09 remaining in the first period, tacked on two assists and hit the empty net late as the Storm locked down their fifth straight win. The Storm captain has 24 points (7-17–24) over 15 games this season after missing much of the 2018-19 campaign to injury. Hillis was Montreal’s third round pick in the 2018 NHL Draft.
• HIGHLIGHTS

3RD STAR: BRADY HINZ (PETERBOROUGH PETES) – 2G, 1A
Brady Hinz collected his third straight multi-point game, scoring another pair of goals against the Kingston Frontenacs as the Petes claimed victory once again, this time by a score of 4-1. Hinz opened the scoring 2:01 into the first period and struck again six minutes into the third while also chipping in with a primary assist on a Keegan McMullen marker. The 19-year-old native of Stratford, Ont. has 14 points (8-6–14) in as many games in this, his fourth OHL season.
• HIGHLIGHTS