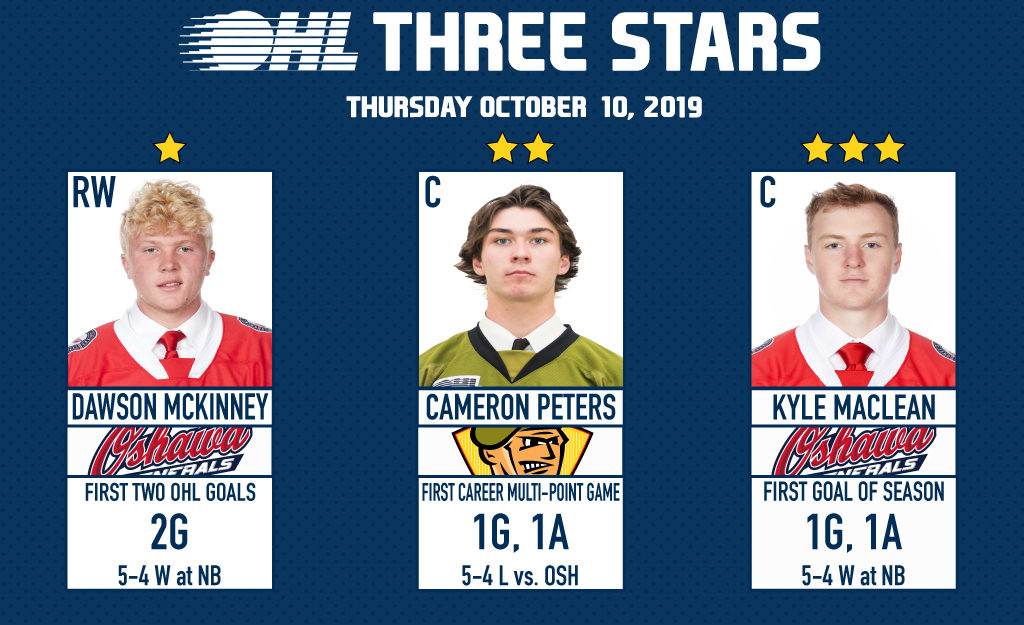 1ST STAR: DAWSON MCKINNEY (OSHAWA GENERALS) – 2G
Rookie winger Dawson McKinney picked a good night to score the first two goals of his OHL career. The 17-year-old from Caistorville, Ont. netted his first 6:41 into the opening period before later scoring the game winner 4:58 into the third. The CHL’s top-ranked Generals held off the North Bay Battalion late to claim their eighth consecutive win to start the season. McKinney was Oshawa’s fourth round pick in the 2018 OHL Priority Selection from the Hamilton Jr. Bulldogs Minor Midget program. He spent last season St. Catharines Falcons Jr. B club.

2ND STAR: CAMERON PETERS (NORTH BAY BATTALION) – 1G, 1A
North Bay Battalion sophomore Cameron Peters enjoyed his first career multi-point game with a goal and an assist in Thursday’s 5-4 loss to visiting Oshawa. The 17-year-old Toronto native set up Niki Korpialho for his first OHL goal with 5:57 left in the opening frame. He’d later score his first of the season with 4:34 left in the third period but it was too little, too late for the Troops as they lost by a goal. A Toronto Marlboros Minor Midget grad, Peters was North Bay’s second round pick in the 2018 OHL Priority Selection.

3RD STAR: KYLE MACLEAN (OSHAWA GENERALS) – 1G, 1A
Newly returned Oshawa Generals captain Kyle MacLean had a goal and an assist on Thursday in North Bay. The overage veteran scored a power play goal 2:44 into the second period before assisting on Oliver Suni’s third of the season just shy of the midway mark of the second. The 20-year-old from Tequesta, Fla. comes off a 60-point (18-42–60) season in 2018-19 before he signed an AHL contract with the Bridgeport Sound Tigers. He was returned to Oshawa for his overage season last week.