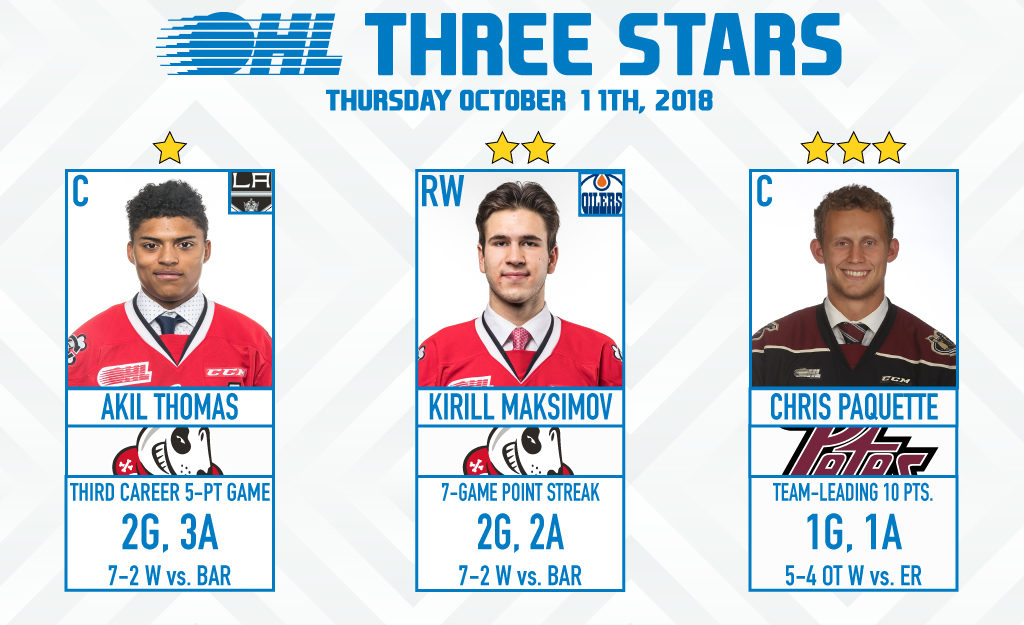 1ST STAR: AKIL THOMAS (NIAGARA ICEDOGS):
His second five-point night of the season, Los Angeles Kings prospect Akil Thomas stole the show once again on Thursday. The 18-year-old led the Niagara IceDogs over the defending Central Division champion Barrie Colts 7-2 on home ice, scoring twice and adding three assists as the Dogs improved to 4-2-1-0. Thomas was all over the scoresheet, scoring twice in the opening 11 minutes of the game before tacking on three helpers in the second period. Thomas has already accomplished a lot in his OHL career, but this season has the makings of a special one for the Brandon, Fla. native as he has 13 points (3-10–13) through his first seven games. He was a second round pick of Los Angeles this past summer.
• GAME HIGHLIGHTS

2ND STAR: KIRILL MAKSIMOV (NIAGARA ICEDOGS):
Edmonton Oilers prospect Kirill Maksimov has quickly formed a reputation around his wicked release and continued racking up points on Thursday. The Russian winger placed himself among the league leaders in goal-scoring with his seventh and eighth tallies of the season while adding a pair of assists to stretch his point streak to seven games. Maksimov now has 13 points (8-5–13) through seven games this season and sits fifth in OHL shots on goal with 32. He was a fifth round pick of Edmonton in 2017.
• GAME HIGHLIGHTS

3RD STAR: CHRIS PAQUETTE (PETERBOROUGH PETES):
After a pair of Niagara IceDogs led Thursday’s Three Stars, a former IceDog in Chris Paquette rounds out the honours. The Peterborough Petes overage veteran had a goal and an assist in Thursday’s 5-4 overtime win over the visiting Erie Otters, also going 19-for-30 in the faceoff circle. Paquette tied the score at four with 4:25 left in the second period, taking a Declan Chisholm feed and one-timing it past Erie’s Daniel Murphy for his sixth goal of the season. Formerly a draft pick of the Tampa Bay Lightning, Paquette has 10 points (6-4–10) through eight games this season.
• GAME HIGHLIGHTS