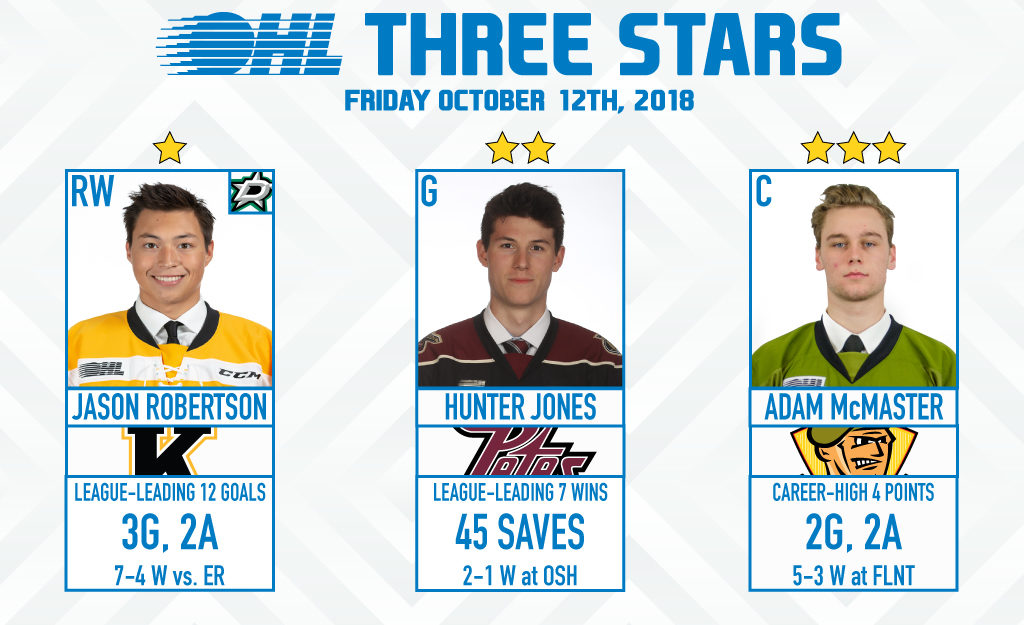 1ST STAR: JASON ROBERTSON (KINGSTON FRONTENACS):
The goals just keep coming. Dallas Stars prospect Jason Robertson matched a career-high with five points on Friday, helping the Kingston Frontenacs defeat visiting Erie 7-4 with three goals and two assists. Robertson teamed up with linemate Brett Neumann who finished the night with four points against his former club. Robertson had a goal in each period and picked up primary assists on both of Neumann’s markers. The OHL leader in shots on goal, Robertson had eight to his credit on Friday and takes over the OHL goal-scoring lead with 12 on the campaign. He was Dallas’ second round pick in 2017.
• GAME HIGHLIGHTS

2ND STAR: HUNTER JONES (PETERBOROUGH PETES):
Draft eligible Peterborough Petes netminder Hunter Jones stopped 45 of the 46 shots he faced on Friday, guiding his club past the rival Oshawa Generals 2-1 on the road. The 18-year-old Brantford, Ont. native led the Petes to their third straight win despite being outshot 46-25 as Brady Hinz and Declan Chisholm scored goals in front of him. After appearing in 15 games last season, Jones is off to a 7-2 start this season with a 2.25 goals-against average and a .937 save percentage in nine contests. He was Peterborough’s fifth round pick in 2016.
• GAME HIGHLIGHTS

3RD STAR: ADAM McMASTER (NORTH BAY BATTALION):
Third-year forward Adam McMaster broke a 3-3 tie with 7:58 left in the third period, helping secure a 5-3 road win for the North Bay Battalion in Flint. McMaster had two goals and two assists on the night for his first career four-point showing. Joining him with four points was Troops captain Justin Brazeau as the Battalion won despite being outshot 38-25. The four-point night gives McMaster eight points (4-4–8) in as many games this season. The 18-year-old native of Beamsville, Ont. was North Bay’s first round pick in 2016.
• GAME HIGHLIGHTS