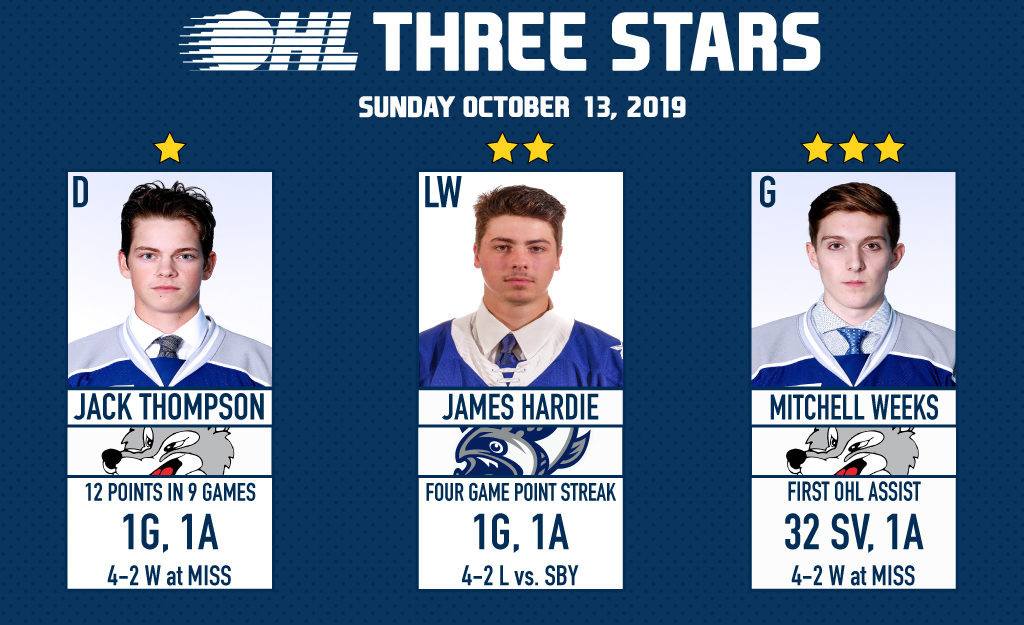 1ST STAR: JACK THOMPSON (SUDBURY WOLVES) – 1G, 1A
Sophomore blueliner Jack Thompson had a goal and an assist as the Sudbury Wolves skated to a 4-2 win in Mississauga. Thompson now has points in seven of his nine games this season for a total of 12 (6-6–12) to sit second among OHL defencemen. The 17-year-old draft eligible blueliner from Courtice, Ont. was Sudbury’s second round pick in the 2018 OHL Priority Selection from the Clarington Toros Minor Midgets.

2ND STAR: JAMES HARDIE (MISSISSAUGA STEELHEADS) – 1G, 1A
Mississauga Steelheads sophomore James Hardie extended his point streak to four games, recording a multi-point output for a third time in that span. Hardie had a goal and an assist as the Steelheads fell 4-2 to visiting Sudbury. The 17-year-old native of Innisfil, Ont. has nine points (6-3–9) through eight games this season and is eligible for the 2020 NHL Draft. He was Mississauga’s first round (8th overall) pick in the 2018 OHL Priority Selection from the Barrie Colts Minor Midgets.

3RD STAR: MITCHELL WEEKS (SUDBURY WOLVES) – 32 SV, 1A
Mitchell Weeks made 32 saves for his second straight win, also recording an assist as the Sudbury Wolves took a 4-2 road win over Mississauga. Weeks and the Wolves fell behind 2-0 early but rallied back to score four unanswered. The 18-year-old from Barrie, Ont. was the first overall pick of the 2018 OHL Under-18 Priority Selection. He’s 2-2 on the season with a 3.63 goals-against average and .899 save percentage. Weeks attended Development Camp with the Arizona Coyotes this past June.