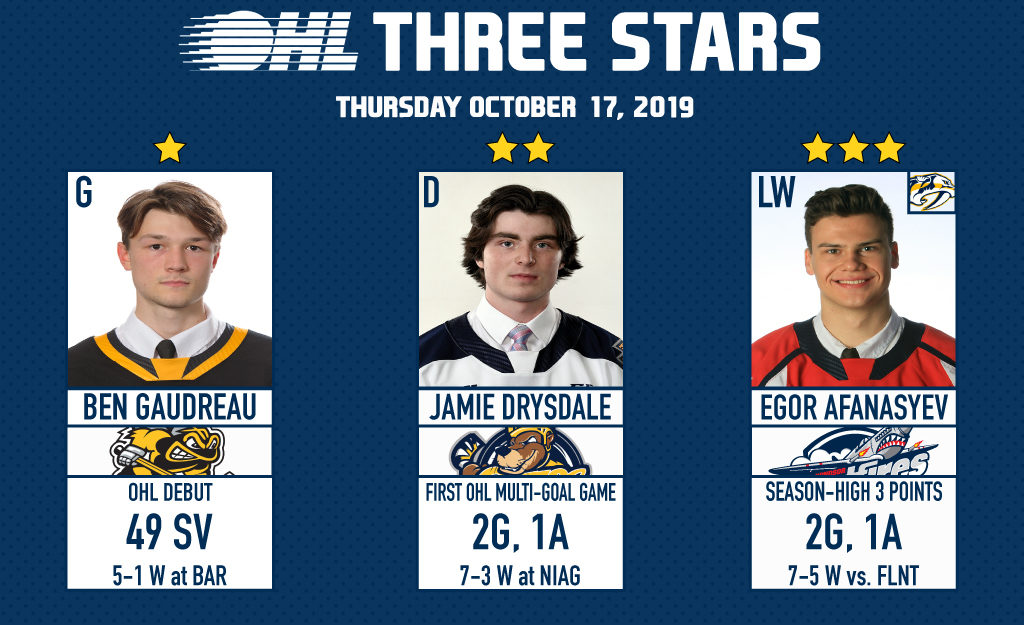 1ST STAR: BEN GAUDREAU (SARNIA STING):
It was an OHL debut for the memory books on Thursday in Barrie as seventh overall OHL Priority Selection choice Ben Gaudreau turned aside 49 shots to lead the Sarnia Sting to their first win of the season. The Sting defeated the Colts 5-1 despite being outshot 50-24 as the 16-year-old Gaudreau was remarkable. The Corbeil, Ont. native underwent offseason knee surgery, delaying his OHL debut to October 17th and the North Bay Trappers graduate gave fans a glimpse of what they can expect out of the OHL’s highest drafted Minor Midget netminder since 2002.
• HIGHLIGHTS

2ND STAR: JAMIE DRYSDALE (ERIE OTTERS):
Top 2020 NHL Draft prospect Jamie Drysdale had two goals and an assist as the Erie Otters exploded for four third period goals to defeat the Niagara IceDogs 7-3 on the road. Drysdale connected for his first career OHL multi-goal game, bringing his point total to 15 (4-11–15) through 10 games this season. The 17-year-old from Toronto, Ont. was assigned an ‘A’ rating by NHL Central Scouting on October’s ‘Players to Watch’ List. Drysdale was the fourth overall pick of the 2018 OHL Priority Selection from the Toronto Marlboros Minor Midgets.
• HIGHLIGHTS

3RD STAR: EGOR AFANASYEV (WINDSOR SPITFIRES):
Nashville Predators prospect Egor Afanasyev scored twice and chipped in with an assist as the Windsor Spitfires outlasted the visiting Flint Firebirds 7-5 on Thursday. Afanasyev scored in the first period before tying the game up at four with six seconds remaining in the second. The 6-foot-3 winger from Moscow, Russia has 10 points (5-5–10) through his first 10 games of the season after spending 2018-19 with the USHL’s Muskegon Lumberjacks. He was acquired by the Spitfires last December in a trade with the Ottawa 67’s.
• HIGHLIGHTS