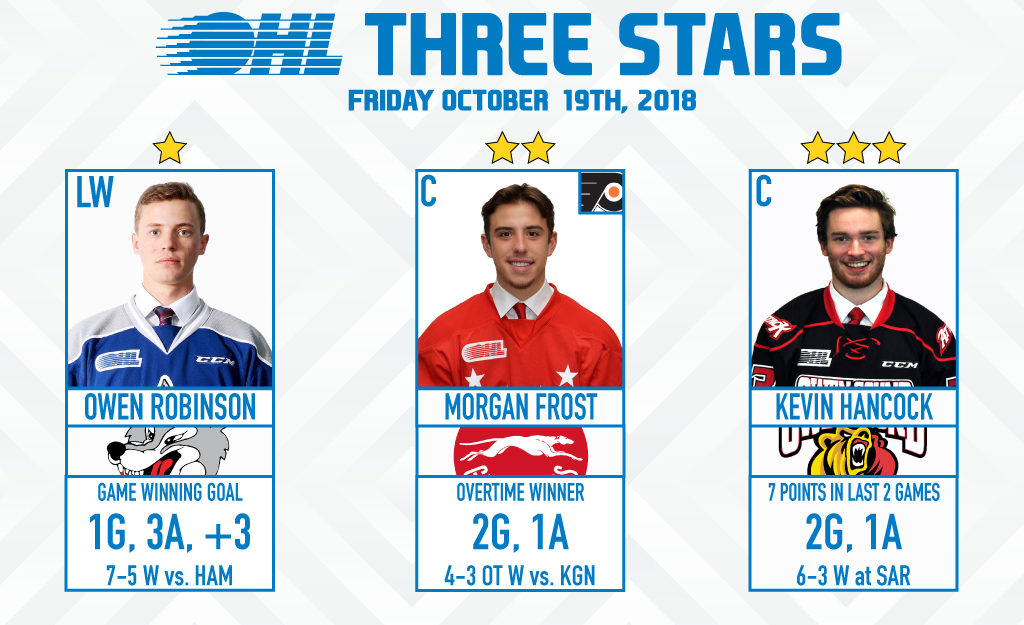 1ST STAR: OWEN ROBINSON (SUDBURY WOLVES):
It was a night to remember for Owen Robinson, whose first four career OHL points all came in the same game. The 18-year-old from Orangeville, Ont. helped lead the Sudbury Wolves to a 7-5 win over visiting Hamilton, scoring his first career marker 12 seconds into the third period for the eventual game winner. Robinson picked up assists on a pair of goals by Macauley Carson, adding another on Quinton Byfield’s fourth of the season. Selected by the Wolves in the 10th round this past spring, Robinson put up 56 points (22-34–56) in 51 games with the NOJHL’s Blind River Beavers last season after going undrafted twice.
• GAME HIGHLIGHTS

2ND STAR: MORGAN FROST (SAULT STE. MARIE GREYHOUNDS):
Philadelphia Flyers prospect Morgan Frost put up at least three points for the fourth time in the last five games, scoring the overtime winner in a 4-3 victory over the visiting Kingston Frontenacs. Both of Frost’s two goals on the night came on the power play, with the first coming midway through the second period. His game winner came on assists from Barrett Hayton and Mac Hollowell just 32 seconds into the extra frame. Frost sits tied for the OHL lead in points with 22 (8-14–22) through 12 games. The Aurora, Ont. native was a first round pick by Philadelphia in 2017.
• GAME HIGHLIGHTS

3RD STAR: KEVIN HANCOCK (OWEN SOUND ATTACK):
Kevin Hancock earns OHL Three Stars recognition for the second time this week, scoring twice and adding an assist in 6-3 Owen Sound Attack road win over the Sarnia Sting. Paired up with his usual linemate Nick Suzuki, the two combined for seven points as Hancock scored 4:02 into the second and again with 8:07 left in the frame to help steer the Attack to victory. The overage forward from Mississauga, Ont. pulls into a tie for the Attack scoring lead with Suzuki, carrying 15 points (7-8–15) out of Friday’s win. Hancock attended training camp with the Buffalo Sabres last month and was Owen Sound’s fifth round pick in 2014.
• GAME HIGHLIGHTS