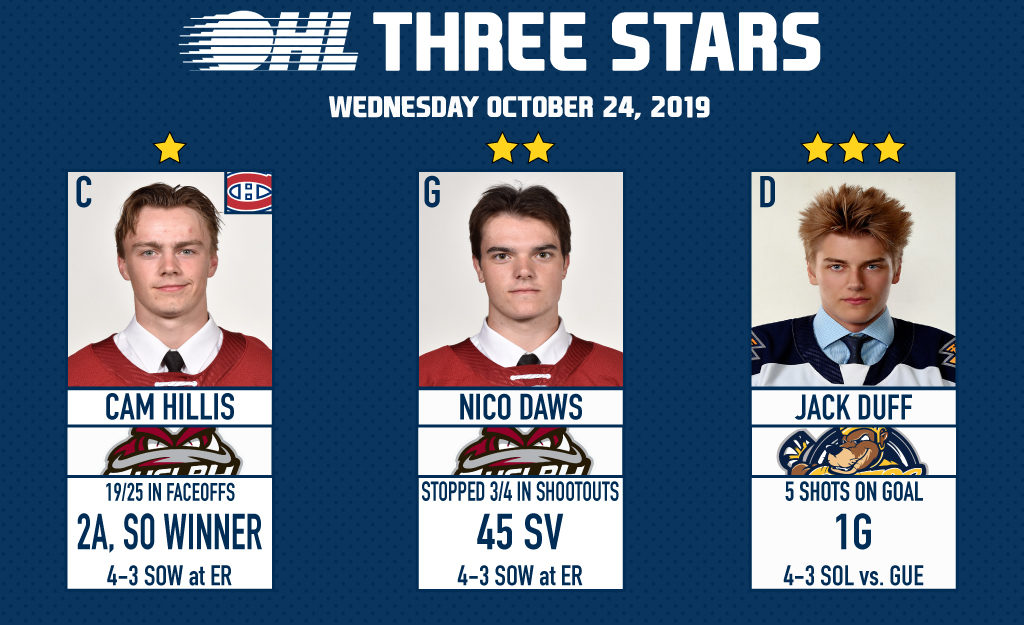 1ST STAR: CAM HILLIS (GUELPH STORM):
Montreal Canadiens prospect Cam Hillis recorded a pair of assists, went 19-for-25 in the faceoff circle and scored a beautiful shootout winner as the Guelph Storm skated to a 4-3 win in Erie. Hillis, who missed a good portion of last season due to an upper body injury, has 12 points (4-8–12) through his first 11 games of the season, winning 56% of his faceoffs on the campaign. The 19-year-old from Enniskillen, Ont. was a third round pick of Montreal in 2018. Hillis is a former OHL Cup champion with the York-Simcoe Express in 2016 before he was selected in the second round by the Storm.

2ND STAR: NICO DAWS (GUELPH STORM):
Nico Daws matched a career-high, making 45 saves as the Guelph Storm got past the Erie Otters 4-3 on the road. Daws turned away three of the four shootout opponents he faced, making at least 30 saves in a fourth straight start to improve his save percentage to .933 on the season. Daws is now 2-1-1-2 with a 2.55 goals-against average over six games in his 19-year-old season. The 6-foot-4, 202Ib. native of Burlington, Ont. was an OHL champion with the Storm last spring.

3RD STAR: JACK DUFF (ERIE OTTERS):
Erie Otters captain Jack Duff scored a goal and had five shots on goal in Wednesday’s 4-3 shootout loss to visiting Guelph. Duff scored his second goal of the season midway through the second period, giving him seven points (2-5–7) over 13 contests. The 6-foot-2, 221Ib. Kingston, Ont. native is in the midst of his third season in Erie after being the club’s third round pick in the 2016 OHL Priority Selection.

OHL Mourns the Loss of Adam Comrie
13 hours ago