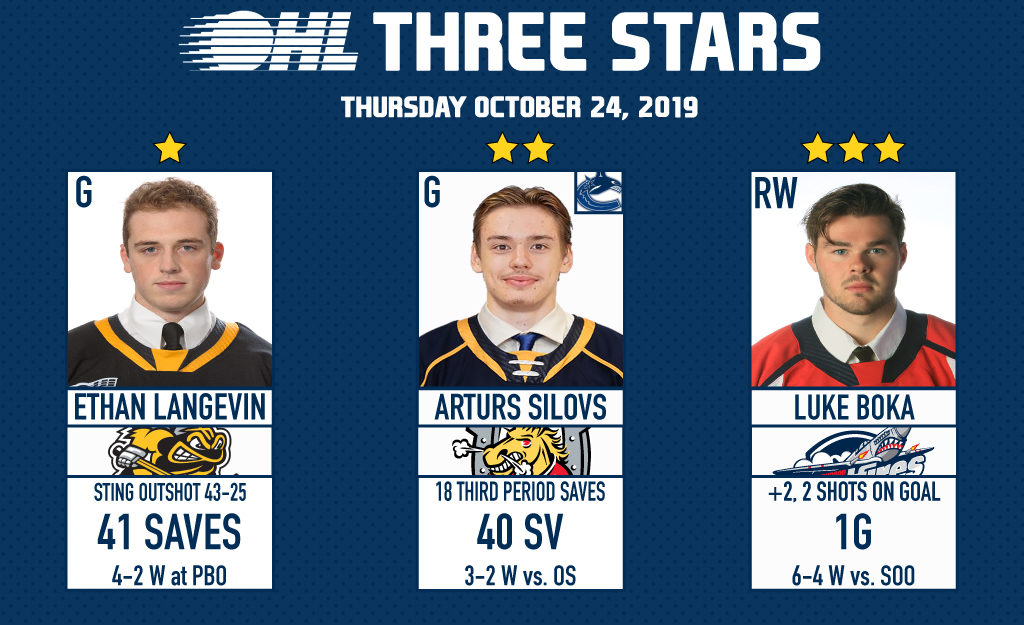 1ST STAR: ETHAN LANGEVIN (SARNIA STING) – 41 SV
Sarnia Sting goaltender Ethan Langevin was a difference maker in Peterborough on Thursday, helping the Sting get past the CHL’s eight-ranked Petes 4-2. The 18-year-old stopped 41 of 43, powering the Sting to their fourth straight win as they were outshot 43-25. Langevin has rebounded nicely from seven straight losses to begin the season, winning his last two starts while making over 40 saves in both appearances. The Brooklin, Ont. native is in his second full season with the Sting after being a sixth round pick of the club in 2017 from the Whitby Wildcats Minor Midgets.
• HIGHLIGHTS

2ND STAR: ARTURS SILOVS (BARRIE COLTS) – 40 SV
Vancouver Canucks prospect Arturs Silovs stood tall in the third period, stopping 18 of 19 shots for a game total of 40 as the Owen Sound Attack poured it on in a comeback attempt. Silovs locked down the Barrie win on home ice as the Colts got past the Attack 3-2. The 6-foot-4 native of Riga, Latvia is 4-2-0-1 with a 3.13 goals-against average and .902 save percentage in his first seven OHL appearances. Thursday’s 40 saves mark a season-high for Silovs who was a sixth round pick of the Vancouver Canucks this past summer.
• HIGHLIGHTS

3RD STAR: LUKE BOKA (WINDSOR SPITFIRES) – 1G
Windsor Spitfires captain Luke Boka scored his fifth goal of the season, helping the Spits earn their fourth straight win in a 6-4 victory over visiting Sault Ste. Marie. Boka, an overage veteran and one of the last remaining pieces of Windsor’s 2017 Memorial Cup championship squad, has five goals in 10 games this season. The 6-foot, 196Ib. product of Plymouth, Mich. was originally Windsor’s fifth round pick in 2015. He’s put up 109 career points with the Spitfires over the past five seasons.
• HIGHLIGHTS