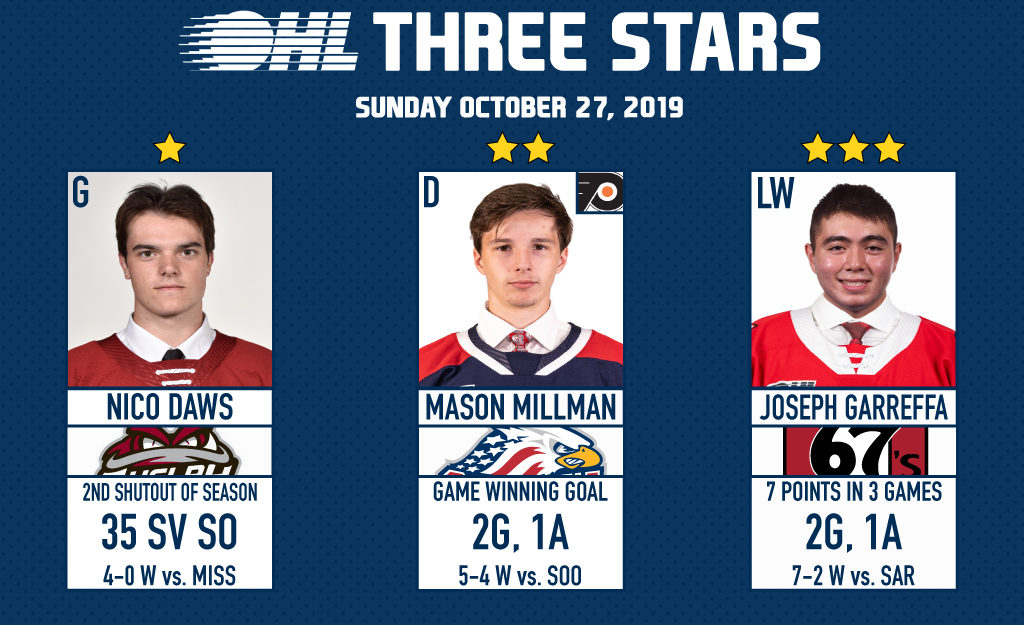 1ST STAR: NICO DAWS (GUELPH STORM) – 35 SV SO
Guelph Storm goaltender Nico Daws stopped all 35 shots he faced on Sunday to backstop his team to a third straight win, defeating the Mississauga Steelheads 4-0 on home ice. The Storm were outshot 35-28 and 14-6 in the third period but the 6-foot-4, 202Ib native of Burlington, Ont. stood tall, improving to 4-1-1-2 on the season with a league-leading 2.30 goals-against average and .938 save percentage. The third-year netminder was a member of Guelph’s OHL Championship squad last spring. He was the Storm’s seventh round pick in the 2016 OHL Priority Selection.
• HIGHLIGHTS

2ND STAR: MASON MILLMAN (SAGINAW SPIRIT) – 2G, 1A
Philadelphia Flyers prospect Mason Millman scored twice and added an assist, burying the game winner with under three minutes to go as the Saginaw Spirit edged visiting Sault Ste. Marie 5-4. Millman enjoyed his first-ever multi-goal game, increasing his point total to nine (5-4–9) through 16 games this season as the Spirit climbed into a tie for the West Division lead. An 18-year-old native of London, Ont., Millman was Philadelphia’s fourth round pick in the 2019 NHL Draft.
• HIGHLIGHTS

3RD STAR: JOSEPH GARREFFA (OTTAWA 67’s) – 2G, 1A
We’re still getting used to Joseph Garreffa in barber poles, but the diminutive overage forward has made an early impression with his new team. ‘Joey G’ was back at it again on Sunday, scoring twice while adding an assist as the Ottawa 67’s defeated visiting Sarnia 7-2. Garreffa has seven points (3-4–7) through his first three games with the 67’s after being acquired from the Kitchener Rangers earlier this month. The 20-year-old Toronto, Ont. native attended rookie camp with the Los Angeles Kings in September.
• HIGHLIGHTS