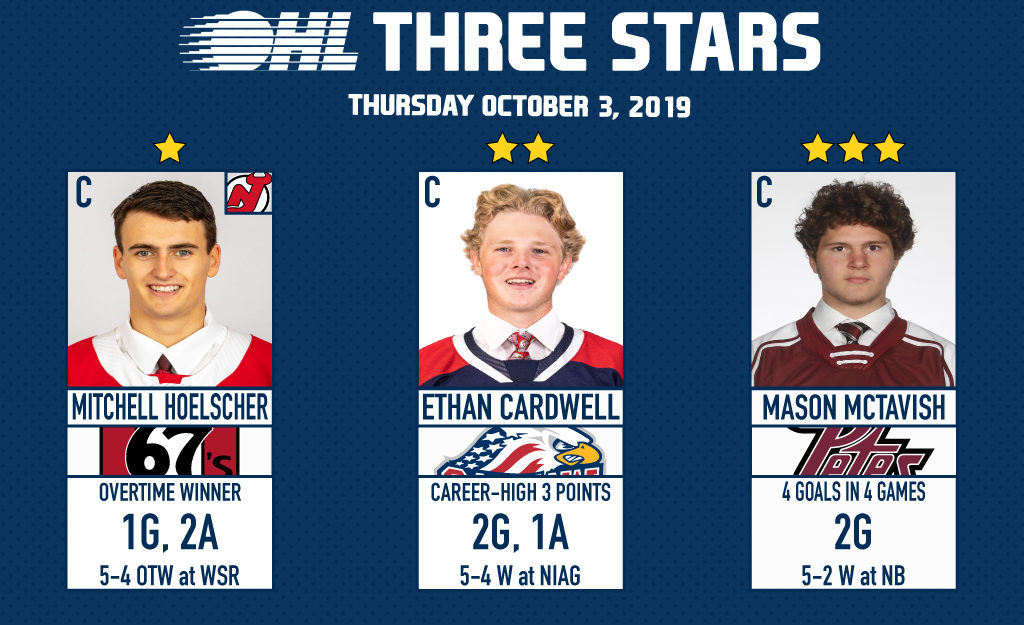 1ST STAR: MITCHELL HOELSCHER (OTTAWA 67’s) – 1G, 2A
New Jersey Devils prospect Mitchell Hoelscher scored the game winner 2:01 into overtime to give the CHL’s top-ranked Ottawa 67’s a 5-4 road win over the Windsor Spitfires. The Barber Poles win their first of a three-game road trip as Hoelscher scored and tacked on two assists while finishing as a plus-3 and going 10-for-17 in the faceoff circle. The 19-year-old from Elora, Ont. has six points (3-3–6) through his first five games of the 2019-20 season after putting up 40 (10-30–40) in 2018-19. The Waterloo Wolves graduate was a sixth round pick of the Devils in the 2018 NHL Draft.
• HIGHLIGHTS

2ND STAR: ETHAN CARDWELL (SAGINAW SPIRIT) – 2G, 1A
Saginaw Spirit forward Ethan Cardwell scored what would stand as the game winner approaching the midway point of the third period, helping his team take a 5-4 decision in Niagara. Cardwell scored twice and added an assist, one-timing a Damien Giroux pass into the net for the winner as the Spirit improved to 3-2-1-0. A 17-year-old native of Courtice, Ont., Cardwell has three points (2-1–3) in six games this season after scoring five times in 15 games last year. The three points are a career-high for Cardwell, who was Saginaw’s second round pick in the 2018 OHL Priority Selection from the Clarington Toros Minor Midgets.
• HIGHLIGHTS

3RD STAR: MASON MCTAVISH (PETERBOROUGH PETES) – 2G
Peterborough Petes rookie Mason McTavish enjoyed his second multi-goal game of the season, scoring twice as the Petes took a 5-2 win in North Bay. McTavish struck 7:40 into the season to put the Petes ahead 2-1 before scoring again with 4:40 remaining in the third period to secure Peterborough’s third win of the season. The 16-year-old from Pembroke, Ont. was the fifth overall pick of the 2019 OHL Priority Selection and has six points (4-2–6) through his first four OHL contests. He’s the son of former Petes forward and OHL champion Dale McTavish.
• HIGHLIGHTS