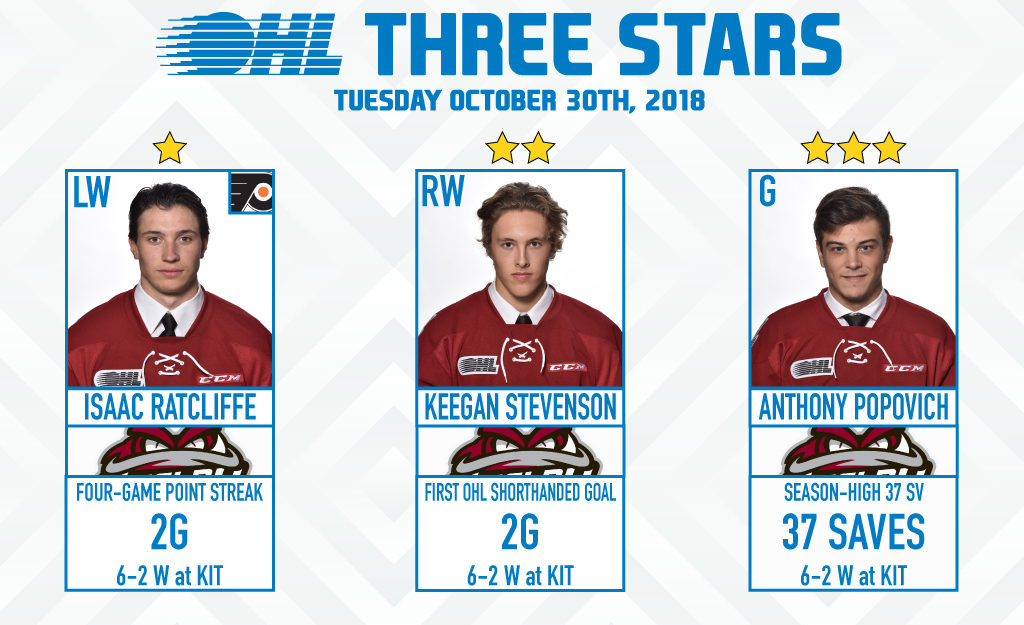 1ST STAR: ISAAC RATCLIFFE (GUELPH STORM):
Fourth-year Guelph Storm captain Isaac Ratcliffe claimed Tuesday’s first star honours with a two-goal performance in his club’s 6-2 road win over the Kitchener Rangers. Ratcliffe scored in the first and second periods for his 12th and 13th goals of the campaign, helping the Storm pull into top spot in the Midwest with a 9-4-2-0 record. The Storm have scored the third-most goals in the OHL this season thanks in large part to Ratcliffe whose 21 points (13-8–21) are second on the club. The 19-year-old from London, Ont. has points in four straight contests. He was Philadephia’s second round pick in the 2017 NHL Draft.

2ND STAR: KEEGAN STEVENSON (GUELPH STORM):
Sophomore Guelph Storm forward Keegan Stevenson put together his second multi-goal effort of the season, scoring twice in Kitchener. The 17-year-old from Sault Ste. Marie, Ont. scored a shorthanded and power play goal in the 6-2 win while finishing with a plus-2 rating on the night. The 6-foot-1, 172Ib. right-winger has seven points (4-3–7) through 15 games this season. Stevenson was Guelph’s sixth round pick in 2016. He is the son of OHL graduate and former NHL forward Jeremy Stevenson.

3RD STAR: ANTHONY POPOVICH (GUELPH STORM):
Guelph Storm goaltender Anthony Popovich earned third star honours in Tuesday’s victory over Kitchener, turning aside 37 of the 39 shots he faced in a 6-2 win. The 19-year-old from Belleville, Ont. improves to 7-2-2-0 this season with a 3.33 goals-against average and .891 save percentage. The former fifth round pick in the 2015 OHL Priority Selection is currently in his third season with the Storm. He attended training camp with the Dallas Stars last month.