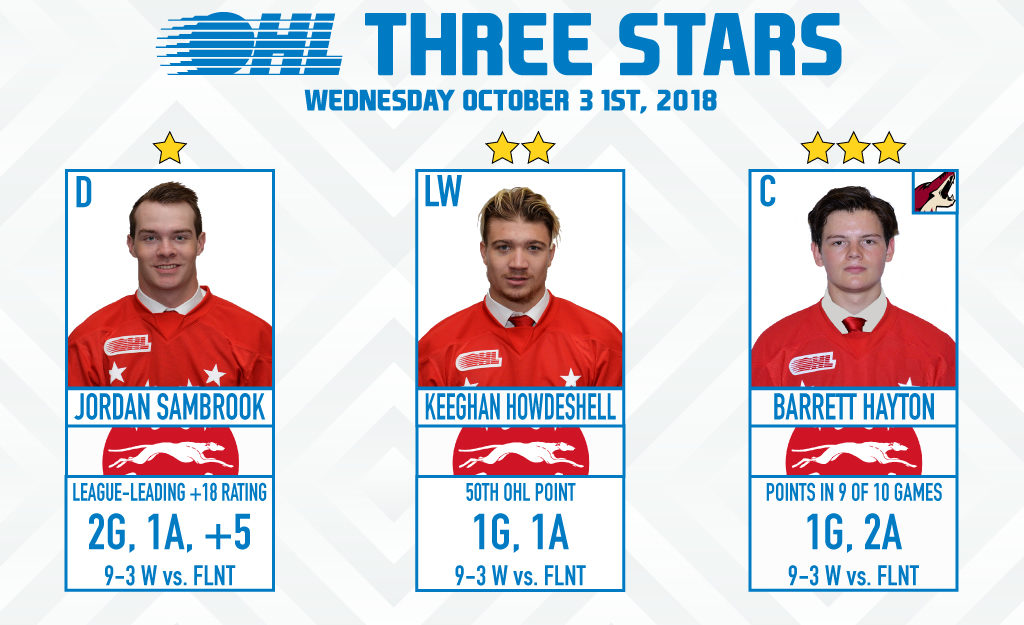 1ST STAR: JORDAN SAMBROOK (SAULT STE. MARIE GREYHOUNDS):
Overage blueliner Jordan Sambrook enjoyed a three-point night with two goals, an assist and a plus-5 rating as the Soo Greyhounds bombarded visiting Flint 9-3. Sambrook scored in the second and third periods while setting-up a Rory Kerins goal as the Hounds were triumphant, improving to 11-3-3-0 atop the West Division. The three points are a season high for Sambrook, who now has 13 points (5-8–13) through 16 games this season to go with a league-leading plus-18 rating. The 20-year-old from Markham, Ont. is a former fifth round pick of the Detroit Red Wings in 2016.

2ND STAR: KEEGHAN HOWDESHELL (SAULT STE. MARIE GREYHOUNDS):
Another Hounds overager, Keeghan Howdeshell took second star honours on Wednesday with a goal and an assist. Howdeshell teamed up with rookie Rory Kerins to score late in the second period and chipped in with an assist on a goal by Jordan Sambrook. The 20-year-old from Brighton, Mich. has 14 points (10-4–14) in 17 games this season. The 6-foot-2, 209Ib. winger attended rookie camp with the Arizona Coyotes last month.

3RD STAR: BARRETT HAYTON (SAULT STE. MARIE GREYHOUNDS):
Arizona Coyotes first round pick Barrett Hayton earned third star honours in Wednesday’s 9-3 win over Flint. The 18-year-old Peterborough, Ont. native had a goal and two assists, giving him points in nine of his 10 games this season. Hayton now has a total of 17 points (7-10–17) on the campaign.