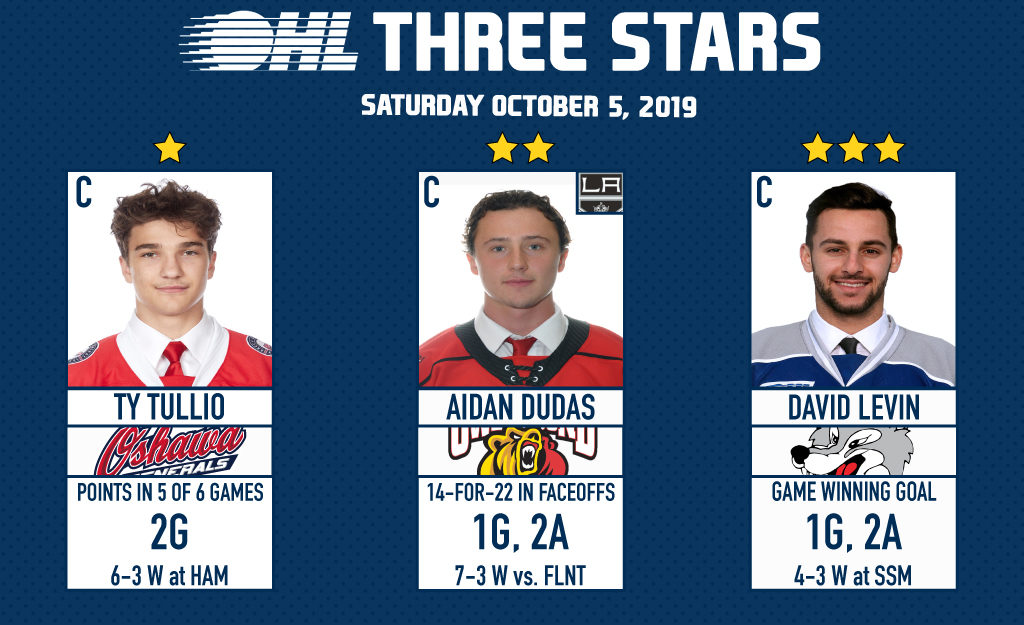 1ST STAR: TY TULLIO (OSHAWA GENERALS) – 2G
2020 NHL Draft prospect Ty Tullio buried a pair of nice one-timers on Saturday night in Hamilton as the Oshawa Generals improved to 6-0 with a 6-3 victory. Tullio’s fourth and fifth goals of the season helped the Generals remain atop the Eastern Conference as the 17-year-old increased his overall output to eight points (5-3–8) through six games. The 11th overall pick of the 2018 OHL Priority Selection, Tullio comes off a strong rookie season that ended with 42 points (15-27–42) over 60 games. The speedy winger is now playing down the middle for the Generals in his sophomore season.
• HIGHLIGHTS

2ND STAR: AIDAN DUDAS (OWEN SOUND ATTACK) – 1G, 2A
Los Angeles Kings prospect Aidan Dudas had a goal and two assists as the Owen Sound Attack stopped the Flint Firebirds’ four-game winning streak in a 7-3 decision on home ice. Dudas pulled off one particularly smooth move, setting up linemate Sergey Popov after making a quick maneuver through his own legs to make the play possible. Dudas recorded four shots on goal and went 14-for-22 in the faceoff circle. The Attack captain has 10 points (2-8–10) through six games this season. He was Los Angeles’ fourth round pick in the 2018 NHL Draft.
• HIGHLIGHTS

3RD STAR: DAVID LEVIN (SUDBURY WOLVES) – 1G, 2A
David Levin scored the game winner and chipped in with two assists as the Sudbury Wolves skated to a 4-3 win in Sault Ste. Marie. The 20-year-old Levin has points in each of his four games this season for a total of 11 (2-9–11). He played down the middle on Saturday, competing on a line alongside Owen Gilhula and Macauley Carson who each had goals. The former first overall pick in the 2015 OHL Priority Selection has embarked on his fifth OHL season after putting up 42 points (18-24–42) over 43 games in 2018-19. Levin attended Training Camp with the Arizona Coyotes last month.
• HIGHLIGHTS