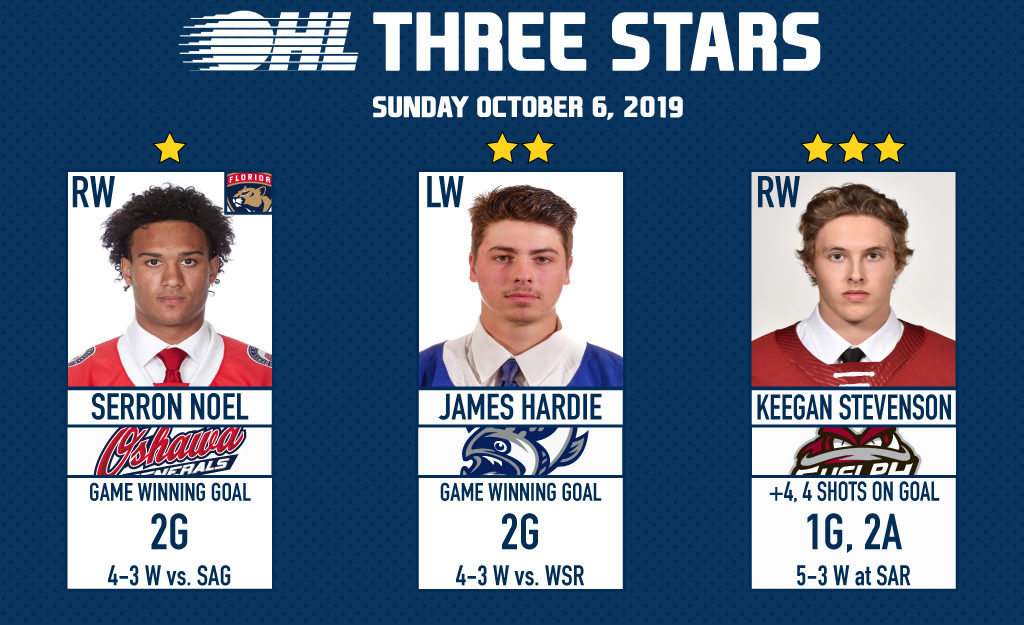 1ST STAR: SERRON NOEL (OSHAWA GENERALS) – 2G
Florida Panthers prospect Serron Noel came up big in the third period, scoring twice to lift the Oshawa Generals over visiting Saginaw 4-3. The win puts the Generals at the top of the CHL standings with a 7-0 record as Noel helped his team pull ahead for good. The 19-year-old from Ottawa, Ont. got a good look from the Panthers throughout the NHL pre-season after being a second round pick by Florida in 2018. Noel put up five points (3-2–5) in his two games this weekend and comes off an 81-point campaign (34-47–81) in 2018-19.
• HIGHLIGHTS

2ND STAR: JAMES HARDIE (MISSISSAUGA STEELHEADS) – 2G
James Hardie scored a pair of goals including the game winner 8:20 into the third period as the Mississauga Steelheads defeated the visiting Windsor Spitfires 4-3. The sophomore forward from Innisfil, Ont. has six points (4-2–6) through his first six contests of the season after registering 22 points (15-7–22) in his rookie season. Hardie was Mississauga’s first round (8th overall) pick in the 2018 OHL Priority Selection.
• HIGHLIGHTS

3RD STAR: KEEGAN STEVENSON (GUELPH STORM) – 1G, 2A
Guelph Storm forward Keegan Stevenson had a goal and two assists along with a plus-4 rating in a 5-3 road win over the Sarnia Sting. Stevenson scored a third period insurance goal while picking up assists on markers by Danny Zhilkin and Daniil Chayka, helping the Storm improve to 2-1-1-1. The 18-year-old from Sault Ste. Marie, Ont. has five points (3-2–5) through his first five games of the season after winning an OHL Championship with the Storm last spring.
• HIGHLIGHTS