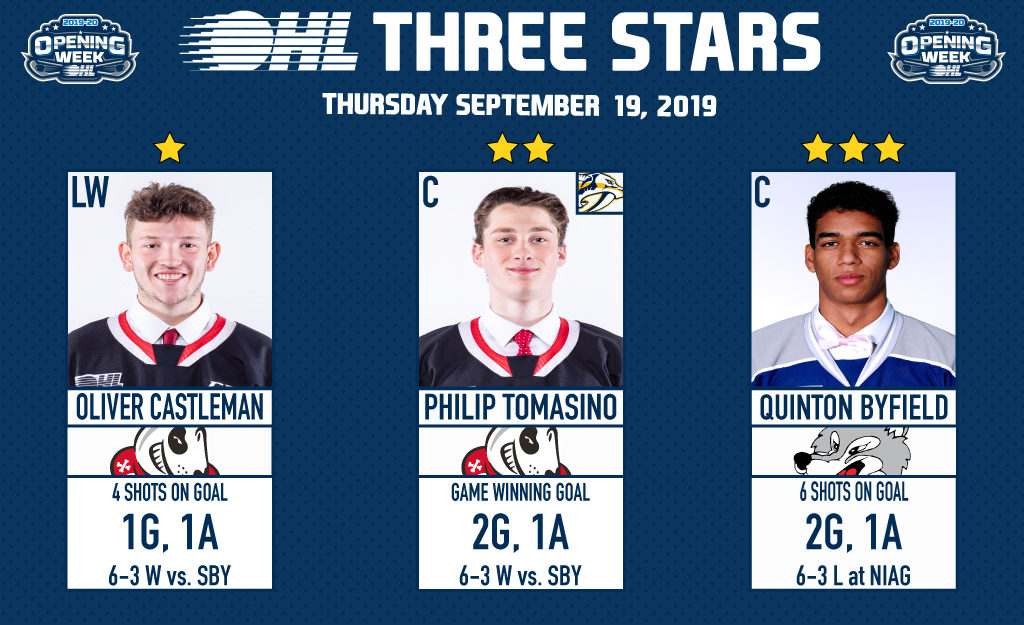 1ST STAR: OLIVER CASTLEMAN (NIAGARA ICEDOGS) – 1G, 1A
Niagara IceDogs overage winger Oliver Castleman earned first star honours in Thursday’s 6-3 Opening Night victory over the Sudbury Wolves. The 19-year-old Gloucester, Ont. native was wearing an ‘A’ to open the campaign and found the back of the net 6:12 into the opening period. He later connected on an odd-man rush with Philip Tomasino and Kyen Sopa, giving him an goal and an assist on the night.

2ND STAR: PHILIP TOMASINO (NIAGARA ICEDOGS) – 2G, 1A
Nashville Predators first round pick Philip Tomasino started his season with a bang, scoring twice while adding an assist on Thursday. Tomasino’s third period marker was the game winning goal before he later hit the open net. The 18-year-old also went 11-for-2o in the faceoff circle and recorded six shots on goal. Tomasino comes off a 72-point sophomore season with the IceDogs, and is off to a good start looking to build off that total in 2019-20.

3RD STAR: QUINTON BYFIELD (SUDBURY WOLVES) – 2G, 1A
Big 6-foot-4 draft eligible centreman Quinton Byfield gave NHL scouts what they wanted to see on Thursday night in St. Catharines as the sophomore scored twice and added an assist as the Wolves fell 6-3 to the Niagara IceDogs. Byfield went 9-for-15 in the faceoff circle and racked up six shots on goal but his Wolves ultimately fell short. The former first overall OHL Draft pick is widely considered a top prospect for the 2020 NHL Draft.