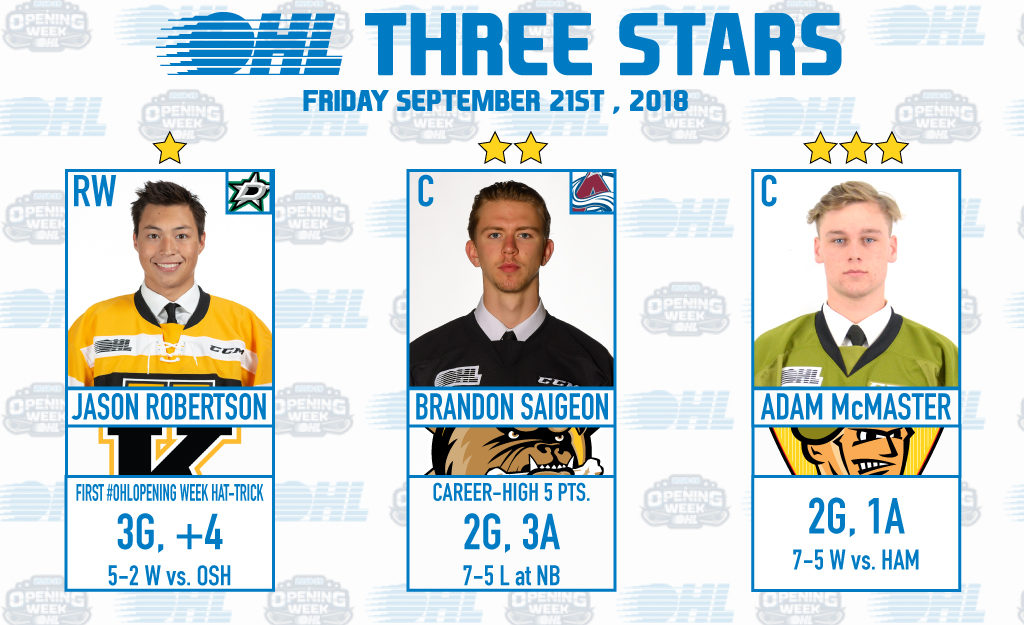 There were some tough choices on the first Friday night of the 2018-19 OHL season, but Jason Robertson, Brandon Saigeon and Adam McMaster emerged as the Three Stars of the Night. Here’s a look at their performances.

2ND STAR: BRANDON SAIGEON (HAMILTON BULLDOGS):
The Hamilton Bulldogs fell 7-5 in North Bay, but Brandon Saigeon was in on all five goals. The Colorado Avalanche draftee recorded a career-high five points, with two goals and three assists in the loss. Saigeon recently returned from a strong showing at Avalanche Training Camp and picked up where he left off as the reigning champion Bulldogs set out on their title defence. Back for his overage season, Saigeon is poised to be one of the league’s top offensive producers in 2018-19.
• GAME HIGHLIGHTS

3RD STAR: ADAM McMASTER (NORTH BAY BATTALION):
While Saigeon filled the scoresheet, North Bay Battalion third-year forward Adam McMaster made some waves of his own. The former first round OHL pick scored twice and added an assist as the Troops won their home opener before a crowd of 3,129. Both of McMaster’s two goals on the night came off deflections as he first got a stick on a Braden Henderson point shot before tipping home a release from Payton Vescio. The Battalion are expecting big things from McMaster as he looks to build off nine goals and 28 points a year ago.
• GAME HIGHLIGHTS